Consumptive water use refers to water that is removed from a watershed by evapotranspiration (loss of water from direct evaporation or plant transpiration), making it unavailable for other uses.  Reclamation needs reliable estimates of consumptive water use to administer interstate and interbasin water compacts, and to quantify and verify volumes of conserved water arising from fallowing and crop type substitution agreements.

Evapotranspiration (ET)  is a function of moisture availability at the surface (from vegetation and the soil) and atmospheric water demand determined by solar radiation, air temperature, humidity, and wind speed.  Daily “reference ET” – the amount of water needed by a healthy, full canopy reference crop, such as alfalfa or clipped grass turf – is the metric against which the ET of other land cover types is compared.  Ratios of actual ET to reference ET are referred to as “crop coefficients” and vary from day to day over the course of the growing season as particular vegetation types develop according to their phenological cycles.  Reclamation uses crop coefficients developed for each mapped land cover type (for example, open water, agricultural crop types, and riparian vegetation types) in combination with daily reference ET values to estimate daily ET for each land cover type.   Daily consumptive water use estimates for each land cover type are summed to produce estimates of consumptive use by land cover type for desired time periods (e.g., weekly, monthly, seasonal, annual).  Total consumptive use estimates  are generated by multiplying crop-specific consumptive use values  by the total areas occupied by the various land cover classes, and summing the results.

Reclamation image analysts used SPOT and Landsat Thematic Mapper imagery to map open water, crop types, and riparian vegetation for the Central and Imperial Valleys of California, and areas adjacent to the Lower Colorado River dividing California and Arizona.  Because some of these areas produce agricultural crops year round, multi-date imagery was required to map the area since up to four different crops could occur on a single agricultural field during the year.  A GIS was used to assign the Landsat derived crop types to vector-based maps of individual agricultural fields developed from high-resolution imagery.  Once within a GIS, consumptive water use was calculated and analyzed at a wide range of spatial scales, from individual agricultural fields to entire river basins. 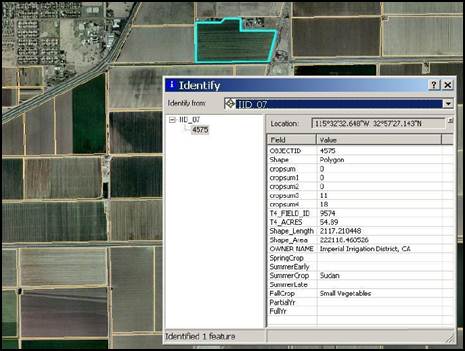 Example of the irrigated lands GIS for the Imperial Irrigation District in California.

Canopy cover is an important variable affecting ET and consumptive water use of riparian vegetation along the Lower Colorado River.  http://pubs.water.usgs.gov/sir20065043. 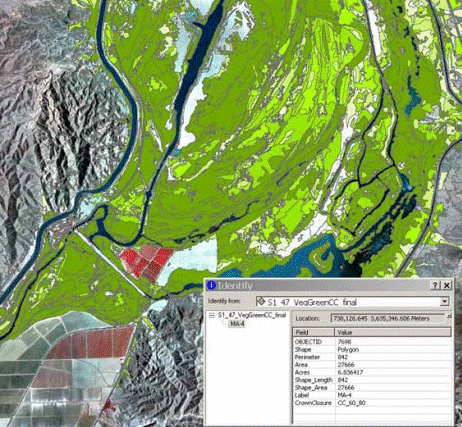