The mission of the Office of Surface Mining (OSM) is to carry out the requirements of the Surface Mining Control and Reclamation Act (SMCRA) in cooperation with States and Tribes. A primary objective of SMCRA is to ensure that coal mines are operated in a manner that protects citizens and the environment during mining, and to ensure the land is restored to beneficial use following mining activities.  To support this mission, active and inactive surface coal mining and reclamation operations are inspected on a routine basis to ensure compliance with approved permits.

In 2010, OSM initiated a 2 year project to investigate the use of high-resolution satellite imagery to determine if it could be used to support the SMCRA regulatory program. This 2 year pilot project was an interagency and interdepartmental partnership working with USGS and the National Geospatial Intelligence Agency (NGA). The scope of the project was limited to three mine sites.  The three sites shown in the figure below are the Centralia mine site within the state of Washington, the McKinley mine site located in New Mexico, and the Valley Creek mining site in Tennessee.

Recognizing the landscape variability between the three pilot project mine sites and the focus on regional mining and reclamation, specific inspection priorities were identified. The investigating team developed Virtual Inspection Priorities (VIPs) that align with the performance standards mandated by SMCRA.   Of 58 mandated performance standards, it was determined that 19 could not be inspected virtually using remote sensing imagery and were excluded from the pilot project.  From the remaining 39, 15 top VIPs were selected by the OSM inspectors as priorities. 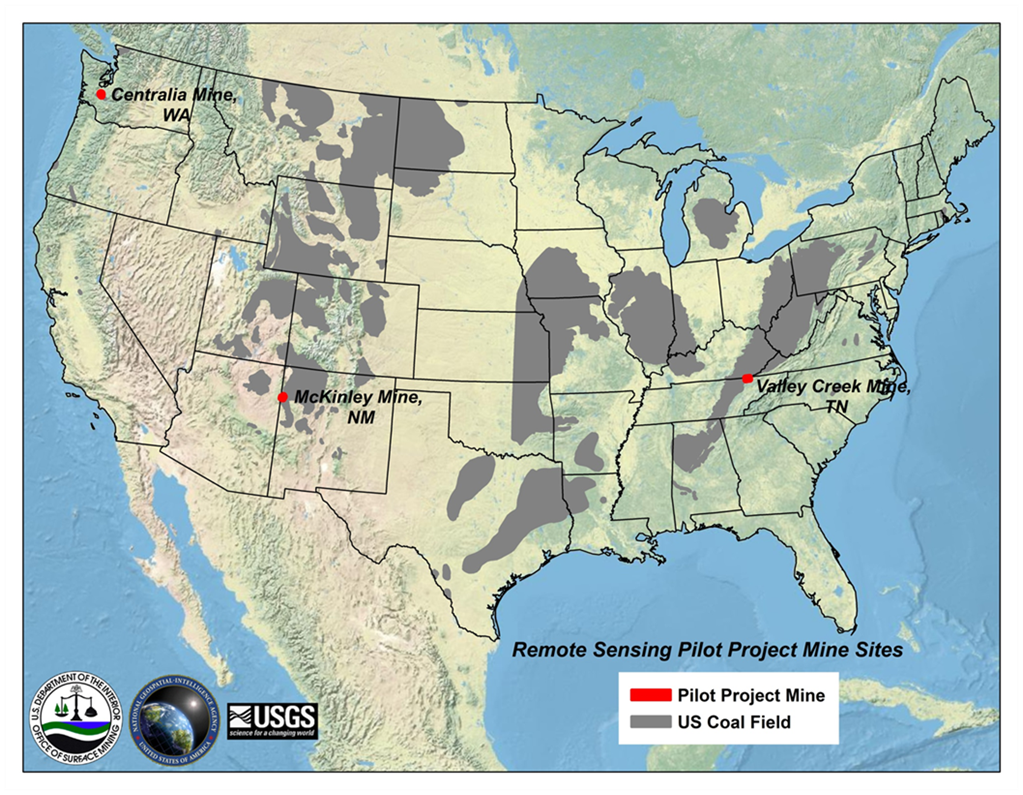 Most of the VIPs require orthorectified imagery to permit the measurement of distances directly on the image and precise alignment with other map data layers.  Digital Elevation Models (DEMs) can be extracted from stereo imagery and provide vertical elevations for features in the images.  The table below lists the 15 VIPs developed for the pilot project and a brief description.  Following the table are detailed descriptions of each VIP, methods, image requirements, and project results.

Table of SMCRA Virtual Inspection Priorities (* Not a performance standard, but was tested to determine an added benefit to the inspector)