To monitor waterbird use and abundance, ground surveys of migrating waterbirds are conducted in the spring and fall on the Upper Mississippi River and Trempealeau National Fish and Wildlife Refuges (NWR). In an effort to assure complete and accurate surveys, aerial photography was acquired to supplement the ground-based surveys.  During the fall 2011, spring 2012 and fall 2012 surveys, four waterbird survey areas were photographed with an Applanix 439 medium format digital aerial camera on five separate waterbird monitoring dates. The photographs had a pixel  resolution of 0.05 m, and the  photography was analyzed for waterbird concentrations using ArcMap 10 and eCognition software.

The objective for applying remote sensing techniques to the high-resolution photography was to find, enumerate, and identify waterbirds in the most efficient and accurate method possible. Waterbird enumeration and identification can be broken into two components: 1)  identify and delineate  areas  that birds occupy within each study site, and 2) identify individual waterbirds within delineated areas. The identification criteria separated waterbirds into four major categories: swan, goose, waterfowl and gull.  Automated identification of large species with distinct coloration like swans, pelicans, and cormorants has a high success rate. The identification of smaller species like ducks also has a high success rate when the waterbirds rest on open water. During migratory periods, when birds move in flocks numbering in the thousands, automated processes are quicker, more repeatable and less tedious than visual identification. The eCognition software has a strong segmentation algorithm that results in very small, meaningful segments, even when spectral differentiation is low.

When vegetation was a background, there were high but still moderate error rates, so further work with eCognition rulesets may mitigate confusion with vegetation.

Knowledge of the concentrations of birds in each survey area can be used to design or modify  survey routes and to determine  how vegetation or season  influences the counts made on those survey routes (see figure). 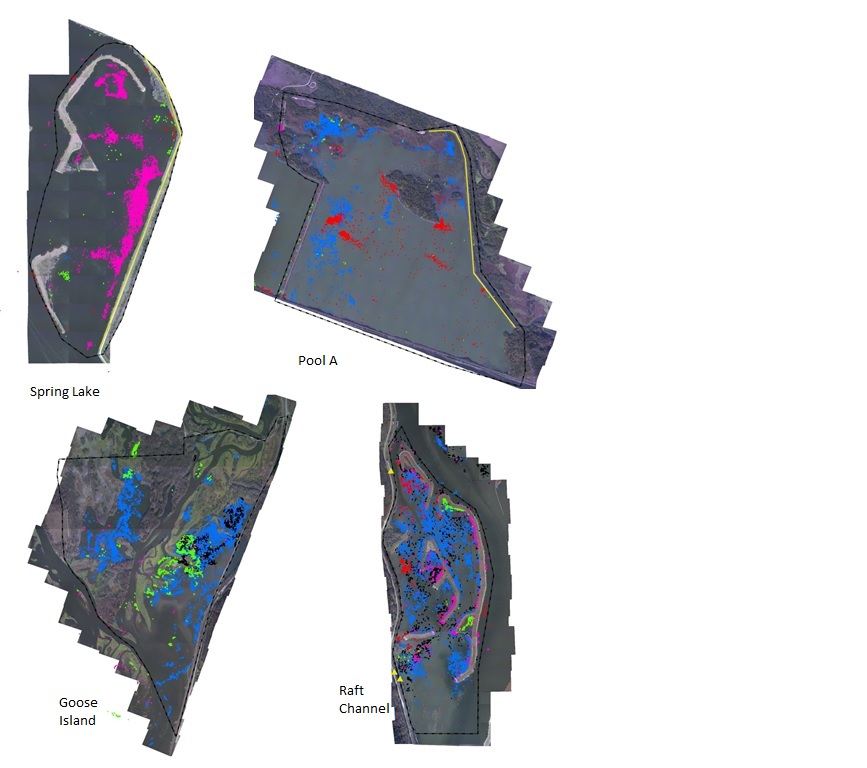 Mapping concentrations of birds can be used to design or modify survey routes and determine how vegetation or season influences counts made on the survey routes.  The study found automated remote sensing analysis to be more efficient than visual identification.