Under Trees and Water at Crater Lake National Park

The 2010 lidar survey of Crater Lake National Park, Oregon, penetrated forested terrain to reveal surface features of the ignimbrite (pyroclastic flow deposit) from the climactic caldera-forming eruption in spectacular detail.  This eruption occurred over 7,000 years ago, culminating in the collapse of Mt. Mazama to form Crater Lake.  In late July, Charlie Bacon and Joel Robinson of the U.S. Geological Survey in Menlo Park visited several unusual features observed in the lidar terrain image.  Ground truthing showed that irregular surfaces east of Scoria Cone are long, linear ridges of lava smoothed by glaciers, while on Lloa Rock late pyroclastic flows shaped the fine-grained ignimbrite into V-shaped mounds that point toward the caldera.  Also imaged are meter-scale fault scarps near the west boundary of the park that were previously unidentified.  The fault scarps cut lateral moraines but are overlain by climactic ignimbrite, suggesting that the last large earthquakes on these faults occurred between deglaciation and the climactic eruption, or between 14,000 and 7,700 years ago.  A journal article on the surface features of the ignimbrite is in preparation and a paper on the faults is planned. 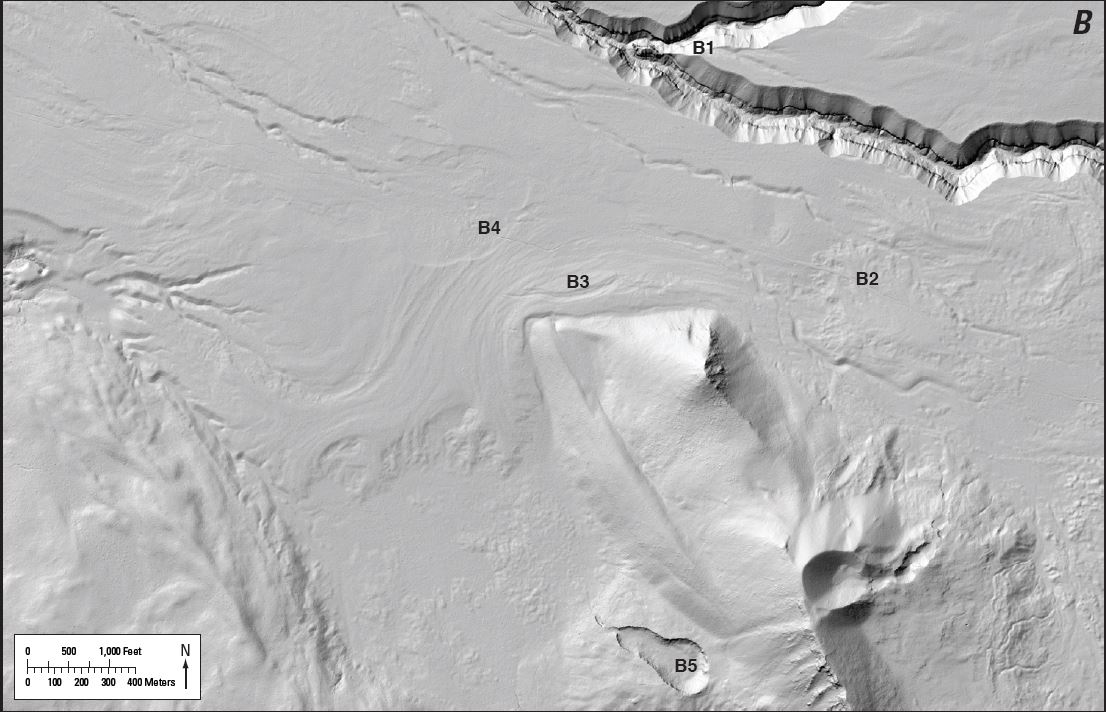 Lidar reveals geologic features beneath the heavily forested Castle Creek area in Crater Lake National Park, Oregon.  Two creeks, Little Castle and Castle, flow through gorges cut into Mount Mazama’s climactic pyroclastic-flow deposit.  At their confluence (B1), the ignimbrite is about 330 ft (100 m) thick.  Many thinner flow deposits have finger-shaped flow lobes (B2).  An extensional rift (B3) at the nose of Castle Point scars the surface of the deposit.  The deposit compacts, because of cooling and settling, and tilts away from the point toward the deposit’s thickest part at the valley center, causing the rift.  A 1-m-tall arcuate scarp (B4) faces west, where the margin of a pyroclastic-flow deposit became unstable, collapsed, and fed a thin secondary pyroclastic-flow to the northwest.  South of Castle Point are crater vents for young basaltic flows, one round and one pear shaped (B5) (Robinson and others, 2012).