The State of New Mexico Abandoned Mine Land Program (NMAMLP) is exploring remote sensing techniques to monitor change in land cover and stream morphology at reclamation projects.  The Program, as well as its reclamation projects, is funded through grants from the Office of Surface Mining Reclamation and Enforcement (OSMRE) based on the Surface Mining Control and Reclamation Act (SMCRA). Unmanned aircraft systems (UAS) promise high resolution imagery, flexible deployment, and relatively low cost at focused areas. We examined the use of an UAS to supplement revegetation and stream channel morphology monitoring at the Dillon and Dutchman Canyons, once part of a larger coal mining site, of Vermejo Park Ranch in northern New Mexico. As a result of NMAMLP geomorphic reclamation work, meanders and dynamic stability have been restored to sections of streams once straightened and degraded by historic coal mining practices. Coal waste had been redistributed and covered with topsoil by earth moving equipment, drainages added, and conditions created to reestablish wetlands to mitigate net loss. Seeding, planting, and natural establishment of native plants were used in the process of revegetation.

A Trimble UX5 Aerial Imaging Rover, fixed-wing UAS with 1-meter wing span and electric pusher propeller, will be deployed at the site to map topography of the post-construction reclamation as well as the revegetation. A series of high-resolution stereo pairs of orthophotography taken with the UX5 will produce a point cloud of XYZ values after photogrammetric processing. A mosaic of color-infrared aerial photography (CIR) will be used to help identify vegetation and subsequent mapping. Digital surface models of pre-and post-reclamation topography will be compared.  We also plan to analyze the vegetation height based on point cloud values attributed with the CIR data.  A mosaic of the four-band multispectral imagery, including a near infrared band, will be used to help identify vegetation and for subsequent mapping. These high resolution aerial images will also aid vegetation classifications of a WorldView2 satellite image purchased by OSMRE Technical Innovation and Professional Services. Ground validation includes vegetation transects and stream channel profiles. The increased spatial resolution of a UAS compared to both traditional aerial photogrammetry and satellite imagery we expect will add significant value to reclamation monitoring. 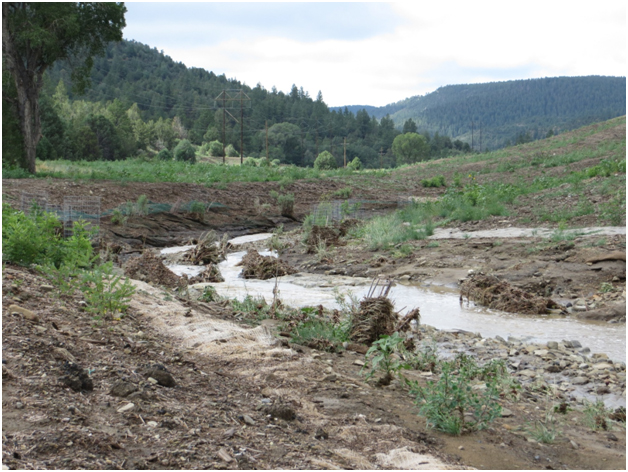 First season of revegetation after geomorphic reclamation within Dillon Canyon at Vermejo Park Ranch, Raton, NM.  Plantings at stream edge have survived a flooding event and vegetation starts to emerge from seeding below the mulch layer.