Ecology of Southwestern Golden Eagles Based on Satellite Telemetry

Shortages of data on survival rates, mortality factors, habitat selection, and dispersal and migration movements hinder decisions for managing golden eagle populations in the western United States.  To help fill these information gaps, 83 golden eagle nestlings in the Southern Rockies/Colorado Plateau region were fitted with satellite transmitters during 2010–2014. Nearly 500,000 hourly GPS locations of the eagles, accurate to within 20 m, have been collected via the Argos satellite system.

Initial findings indicate relatively low first-year survival rates but greater survival thereafter. Chief mortality factors include powerline electrocution or collision, shooting, and poisoning; however, the cause of mortality is unknown in some cases.  Nearly all eagles remain within 60 miles of their sites of origin as juveniles and subadults.  However, about 40 percent of the eagles annually migrate 250–750 miles northward for summer, movement behavior previously unknown for the species and a factor having key implications for risk and population mixing.

The project data are helping form underpinnings of continental-scale “meta-analyses.”  For example, to aid decisions for conserving areas most important to the eagle, we identified key migration corridors and overlap between highly valued habitat and potential development areas.  The FWS and collaborators are currently expanding this work in other western regions of the United States. 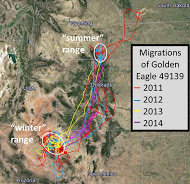 Annual migrations between Arizona and Wyoming by a single subadult female golden eagle, as documented by satellite telemetry.