Two separate but related mapping projects were recently completed for Ruby Lake National Wildlife Refuge in northeastern Nevada. The first was to create a detailed map of vegetation and land cover on the refuge. We used 1-m resolution aerial photography acquired through the National Agricultural Imagery Program in 2013. The full 4-band imagery was utilized along with derived products including the Normalized Difference Vegetation Index and the variance of band 4 (near-infrared), which is used as a measure of image texture. Additionally, a high-resolution digital terrain model produced from lidar data acquired in 2009 by the regional office in Portland was used. The data were input to a hybrid supervised classification model that combined image segments created in Trimble eCognition with products from the RandomForest data mining algorithm in the R statistical software package. Field data for model training and validation were supplied by refuge staff and the Refuge Inventory and Monitoring Program through a contract with the University of Nevada, Reno.

The goal of the second mapping project was to improve the classification of seasonal wetlands and to investigate the dynamics of water extent and inundation on the refuge. We used the Landsat data archive to analyze the extent of flooding and inundation from 1984 to 2012. This analysis revealed that water availability from winter precipitation may lag several years until it outflows onto the refuge. The analysis also revealed the extent of inundation onto the vast playa areas of the refuge and the periodicity of these dynamics. This information was incorporated into the Water Resources Inventory and Assessment and will help inform management activities on the refuge. 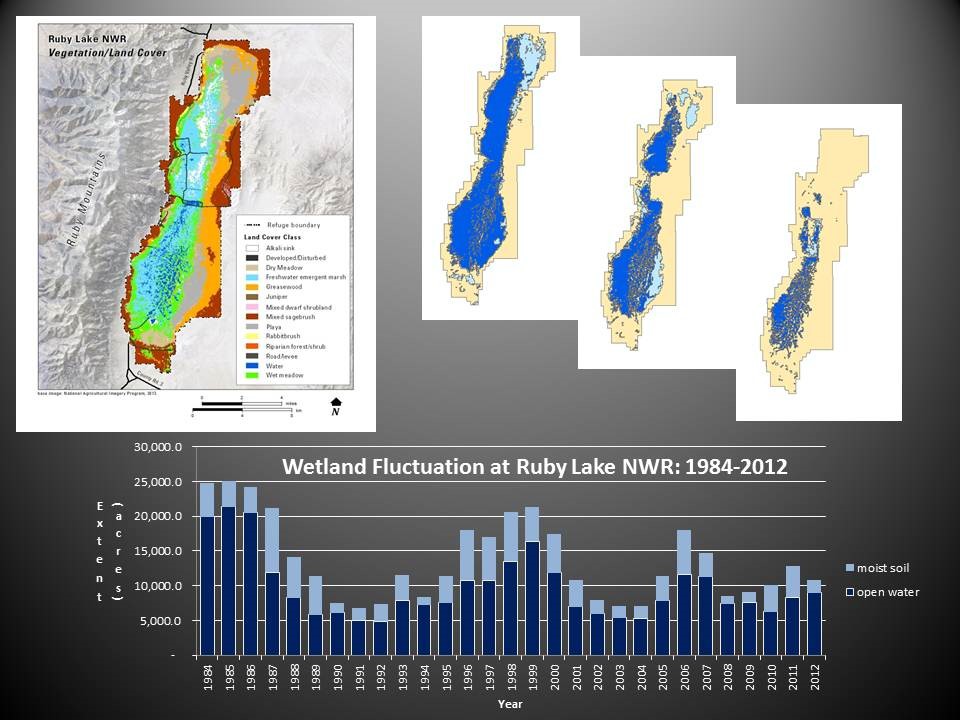 Ruby Lake National Wildlife Refuge Vegetation and Land Cover map, and graphics illustrating the temporal variability of inundated areas and open water on the refuge from 1984–2012.