This project explores the use of an Unmanned Aircraft System (UAS) to map stream channel morphology and monitor re-vegetation efforts in the Dillon and Dutchman Canyons, which was once part of a larger coal mining site in Vermejo Park Ranch, near Raton, New Mexico.  A fixed-wing Trimble UX5 Aerial Imaging Rover UAS with a 1-m wingspan and an electric pusher propeller was deployed at the site in August 2014. A 16.1-megapixel compact camera (15-mm lens) mounted in the UX5 was used to take high-resolution images along a programmed 30-minute flight path over the 0.16-square-mile reclamation study area. Several geographically overlapping images were used to create point clouds with XYZ values. Each point was attributed with Red, Green, and Blue (RGB) spectral values and classified as either bare ground or vegetation. Vegetation height was summarized by subtracting the elevation between points classified as bare ground from those classified as vegetation. Ground control produced a vertical accuracy of 0.44 (± 0.23) foot and at-ground sensor resolution was 0.13 foot (1.6 inches). One-foot contours were created from the topographic model. Ground validation included vegetation sampling and stream channel  cross sections. The data will be used to map the topography of the post-construction reclamation and aid the vegetation classification of a WorldView-2 satellite image acquired within 2 weeks of the UAS deployment.  Compared to both traditional aerial photogrammetry and satellite imagery, the increased spatial resolution of UAS-acquired imagery is anticipated to add substantial value to reclamation monitoring as well as detection of mining and archaeological features. 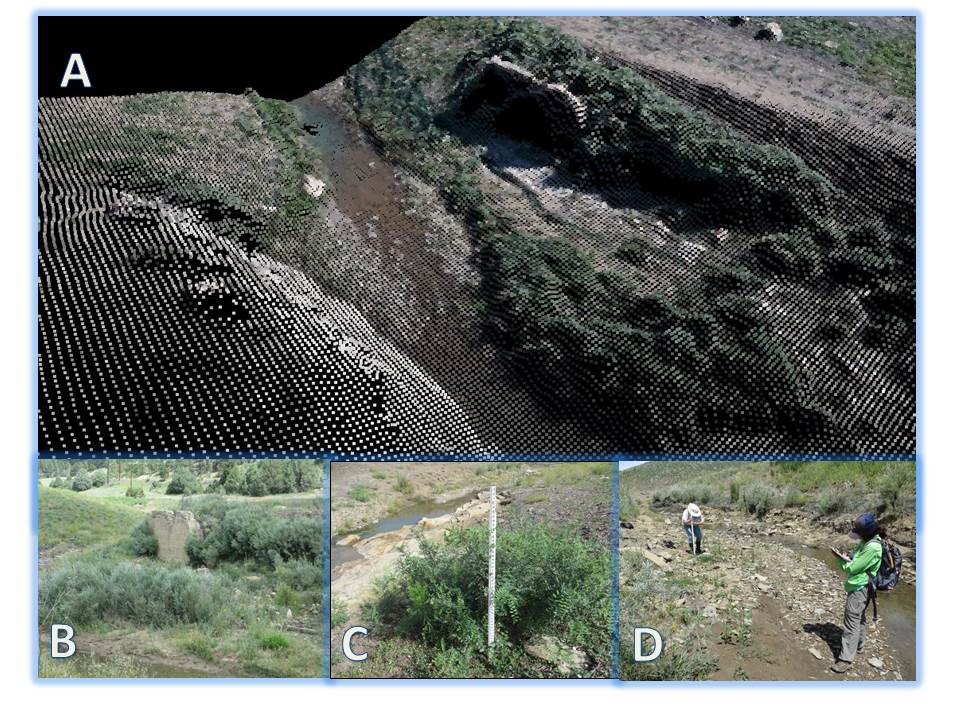 A) Point cloud of XYZ locations and RGB imagery values of a section of the stream in Dillon Canyon. The 3D representation is portrayed in Global Mapper version 15.2. B) Ground photo of the same section with closeup of willows (5–10 feet tall) and an archaeological structure. C) Ground validation of vegetation species, height, diameter, and GPS location. D) Stream cross-section measurements to compare with topographic surface model.