The Landsat Program is a joint effort of the USGS and NASA to use Earth-observing satellites to capture, process, and freely distribute land-surface image data.  Landsat imagery enables users to derive information about local and global conditions including land use, land cover, irrigation water use, crop vigor, wildfire and flood extent, forest health, surface-water area and quality, invasive plant and insect spread, drought status, and many other image-data applications.

Under the Landsat Program partnership, NASA develops and launches Earth-observing instruments and spacecraft, and the USGS develops the associated satellite ground systems.  In addition, the USGS conducts satellite flight operations, operates and maintains the ground systems, and manages image-data reception, processing, archiving, and distribution. For 42 years, a primary objective of the Landsat Program has been to record changing land-surface conditions across the globe through the collection and archive of consistently calibrated image data.

Each image in the Landsat archive at the USGS Earth Resources Observation and Science (EROS) Center near Sioux Falls, South Dakota, covers over 12,000 square miles at a pixel resolution of 30 m, about the same area as a 90- X 90-foot baseball diamond. In 2014, the USGS increased the collection and processing volume for Landsat 7 to over 400 images per day and to over 700 per day for Landsat 8 (launched by NASA in February 2013).  By comparison, when Landsat 7 was launched in 1999, 100 images per day were added to the archive.  With increasing amounts of current and historical imagery available from the Landsat archive, and thanks to NASA’s improvements for Landsat 8 that include crisper images, better resolution of snow- and ice-covered regions, improved detection of water-column constituents such as algae, and better cloud screening, users downloaded 5.6 million images in the  6-month period from March through August 2014. 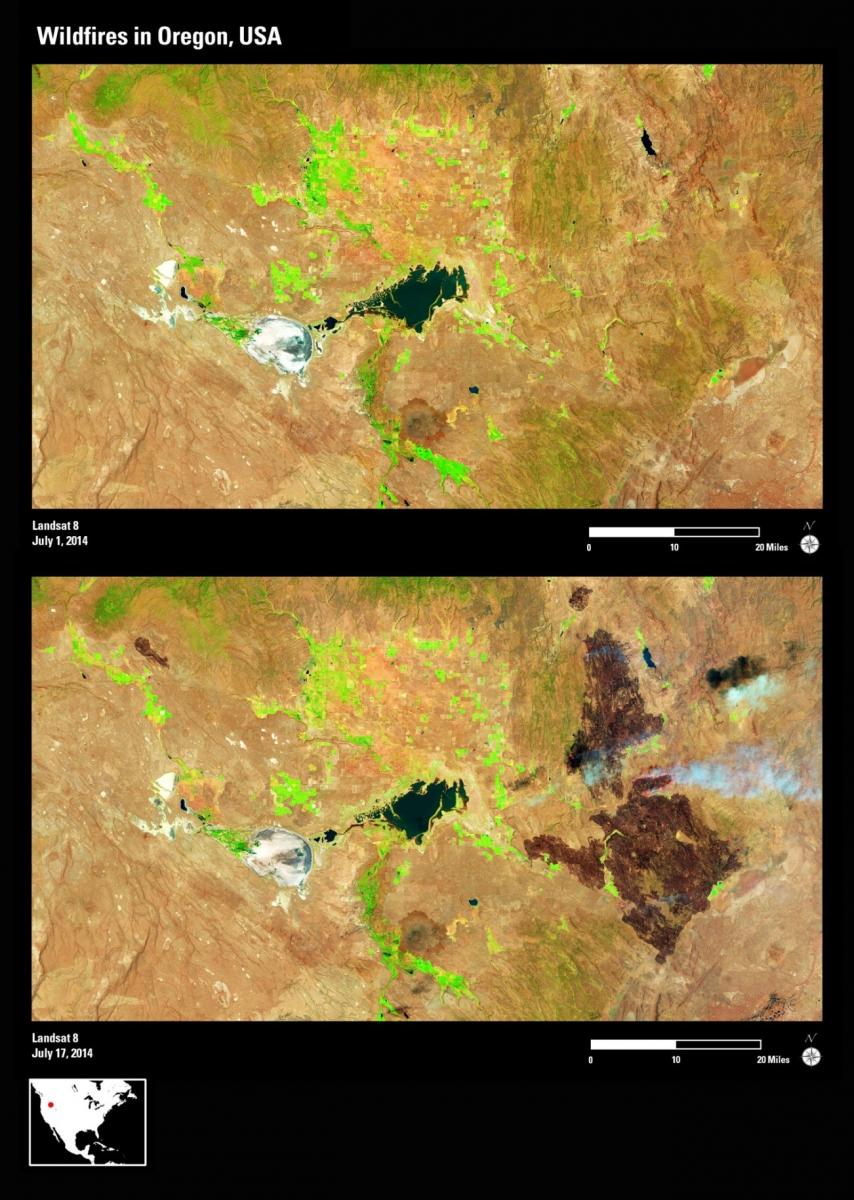 Wildfires in Oregon:Responders in semiarid east-central Oregon fought several separate fires that were started by lightning near Malheur Lake on July 14, 2014. The combination of high winds, low humidity, and high temperatures made firefighting work difficult.  These Landsat images were acquired on July 1, 2014 (top image), and again on July 17, 2014 (bottom image). Malheur Lake is in the center of both images. The large fire scars visible in the lower image show the area burned (red/brown) within the Buzzard Complex as of July 17. The bright orange areas also show actively burning fires at the time of image acquisition.

Landsat imagery is an important tool to help evaluate the areas damaged and destroyed by fire, and can assist in response planning and identifying areas of further risk. Future images from Landsat will be helpful for monitoring the land recovery after major fires such as this.