The Lower Colorado River High Flow Experiment in Mexico is a collaborative monitoring project with teams of scientists from governments, universities, and non-profits on both sides of the border. The goal of the project is to document post-flow changes in the vegetation and riparian habitat along the lower Colorado River in response to a pulse flow mandated by the “Minute 319” international agreement.  See related disussion in the Bureau of Reclamation section, “Colorado River Delta Restoration.”

The time series of satellite data revealed a steady decrease of green vegetation in all river reaches since the flood years of 1997–2000. The loss of vegetation vigor has been accompanied by a loss of bird habitat from 2002 to the present and has led to a lowering of ET in each river reach. The pulse flood was designed to restore some of the vegetation vigor and to germinate new cohorts of native trees throughout the river reaches. Early positive results are apparent in the zones of inundation. Over time, upstream groundwater recharge is expected to restore productivity in downstream river reaches. Over a period of years, a pulse flow should enhance the productivity of the groundwater-dependent riparian vegetation. The riparian vegetation along the Colorado River provides important habitat for many species and is a critical fly-way for many migratory birds. 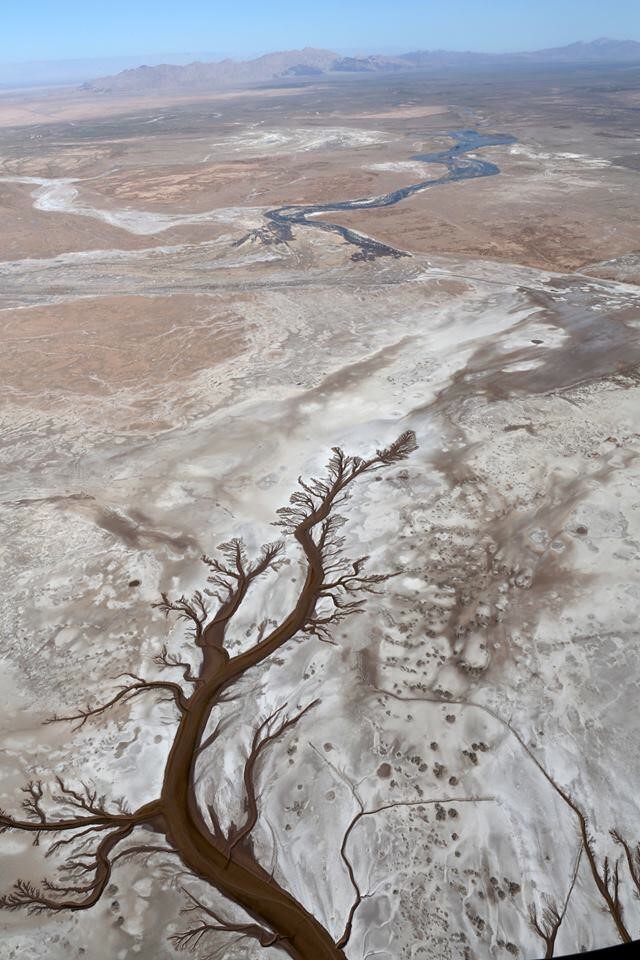 The Colorado River Meets the Sea of Cortez: In this image of the U.S.-Mexico border area, the Colorado River forms the sinuous blue stream ending in the upper middle portion of the photograph. The dark brown feature with intricate branches (lower left) is in fact not a stream but a tributary of the main body of the Sea of Cortez in Mexico, which is located just beneath the image and not visible. Photo Credit:  Francisco Zamora, Sonoran Institute, with aerial support by Lighthawk.