Remotely sensed data and technologies are critical for a science-driven emergency response to landslide disasters. Topography derived from lidar, Interferometric Synthetic Aperture Radar (IFSAR) , optical imagery, and GPS can provide fundamental information to forecast and respond to landslide activity. High-resolution topography collected before and after landslide movement can be differenced to obtain estimates of deposit thickness. For example, maps of deposit thickness derived from lidar data were used to develop safe and efficient search strategies following the March 2014 SR530 landslide near Oso, Washington. The response to the SR530 landslide relied on GPS technologies to detect small (less than a few centimeters) displacements in and around the slide. This information was critical to the near-real-time assessment of additional landslide movement, which potentially threatened the month-long search operations. Similar maps were developed for the Collbran landslide in western Colorado in May 2014 by taking the difference between pre- and post-event IFSAR and lidar data. Color optical imagery is being used to map the occurrence and extent of debris flows generated by record-breaking rainfall in the Colorado Front Range during September 2013. These maps, combined with new lidar-derived topography, are the basis for new debris-flow hazard assessments. 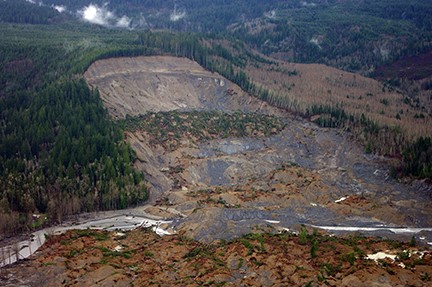 Photograph from aerial survey showing the upper parts of the landslide that occurred in northwestern Washington on March 22, 2014. This photo was taken on March 27, 2014. Credit: Jonathan Godt, USGS