Changes in sandbar geometry were mapped using historcal and recent aerial imagery to quantify the extent of sandbar encroachment into the water intake structure of the pumping plant for the Buford-Trenton Irrigation District, Williams County, North Dakota.  Nine sets of aerial imagery spanning over 60 years and rectified plats from the original 1893 U.S. Geological Survey (USGS) data were used to study changes in the Missouri River extent and course. Using 1952 aerial images (rectified using Global Mapper), the river edge was captured as an ArcGIS polygon that also depicted islands and sandbars. The mosaicked older aerial images (top left) are from the USGS Earth Resources Observation and Science (EROS) Center EarthExplorer website.  In the top right image, the semi-transparent 1952 river area overlays the modern 2014 National Agricultural Image Program (NAIP) orthoimage. The river was located farther north in the 1952 image, as seen by the extension of the vegetated sandbar in 2014 into the transparent blue of the former river course. The red polygon outlines the bounds of the water plant and shows how the sandbar is encroaching into the intake of the pumping plant. The middle images compare the river in 1952 and 2014 within the red area in section 17, where the river channel has narrowed substantially. The final image shows a sonar transect across the river; transects from the North Dakota State Water Commission were used to locate the deeper areas of the river channel to identify options for relocating the water intake. 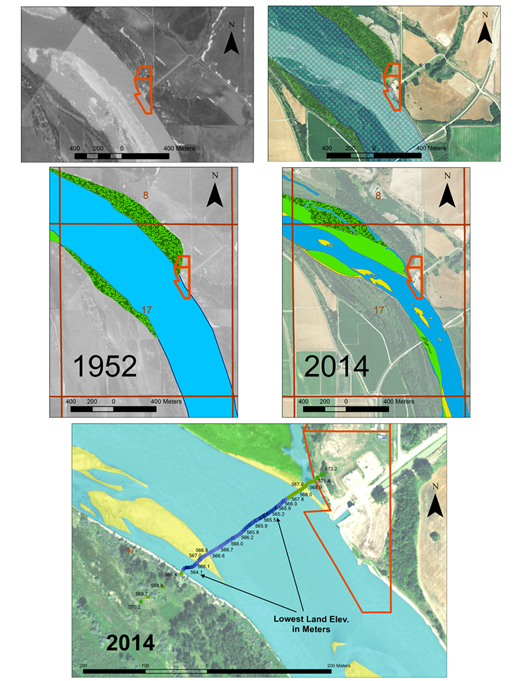