Behavior of Bats at Wind Turbines

Bat fatalities at wind turbines peak during low wind conditions and primarily involve tree-roosting bats. To investigate the reason for this pattern, USGS researchers and colleagues used thermal surveillance cameras, near-infrared video, acoustic detectors, and radar to monitor bat behavior at a wind farm in Indiana from July to October 2012. During periods of low wind, more bats approached turbines than during periods of high wind. As wind speeds increased, bats more frequently approached turbines from a downwind direction, but only when turbine blades were not turning. When turbine blades were turning, the bats approached less frequently as wind speeds increased. Results suggest that tree-roosting bats may be attracted to turbines because air currents mimic those around tall trees that harbor insect prey and roosting sites on downwind sides. These findings may help inform strategies for minimizing fatalities by focusing determents where and when tree-roosting bats are most attracted to turbines. 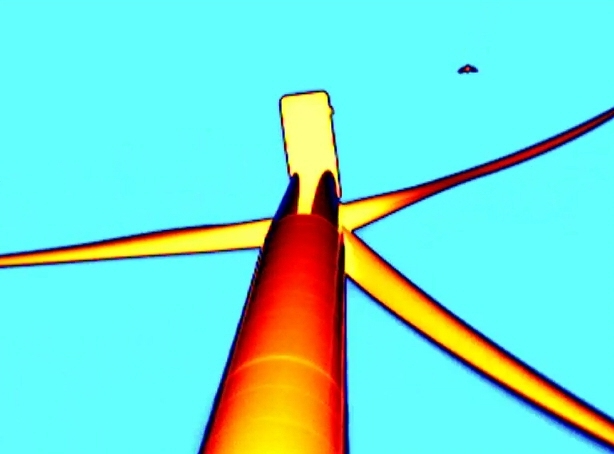 Thermal video still of bat approaching from downwind. The bat is black, the turbine is red-orange, and the sky is blue.