The five Laurentian Great Lakes of Superior, Michigan, Huron, Erie and Ontario provide a variety of services to the millions of people that live in the basin. Yet the sheer size of the lakes challenges lake managers’ understanding of how these ecosystems function. USGS scientists at the Great Lakes Science Center in Michigan are combining multiple remote sensing technologies to  better understand these vast resources.

Using Sea-Viewing Wide Field-of-View Sensor (SeaWIFS) and Moderate Resolution Imaging Spectroradiometer (MODIS) data to measure primary production, a USGS researcher found that both invasive species and climate have played a major role in reducing primary production in Lakes Michigan and Huron. Scientists at the Great Lakes Science Center have been using vessel-deployed hydroacoustic surveys to study fish communities in the Great Lakes since the 1970s. But in 2009, they combined satellite data with the hydroacoustic data to study the Lake Huron fish community. These new satellite remote sensing methods have allowed USGS scientists to couple satellite and ship-based remote sensing data to identify drivers of spatial patterns in fish community composition and density in Lakes Superior, Michigan, and Huron.

In addition, Great Lakes Science Center scientists are working with the Monterey Bay Aquarium and Research Institute to deploy a Long-Range Autonomous Underwater Vehicle to complement ship and satellite data in a lakewide study of drivers of spatial patterns in the lower food web of Lake Michigan. The study is made possible by a grant from the USGS Innovation Center for Earth Sciences. 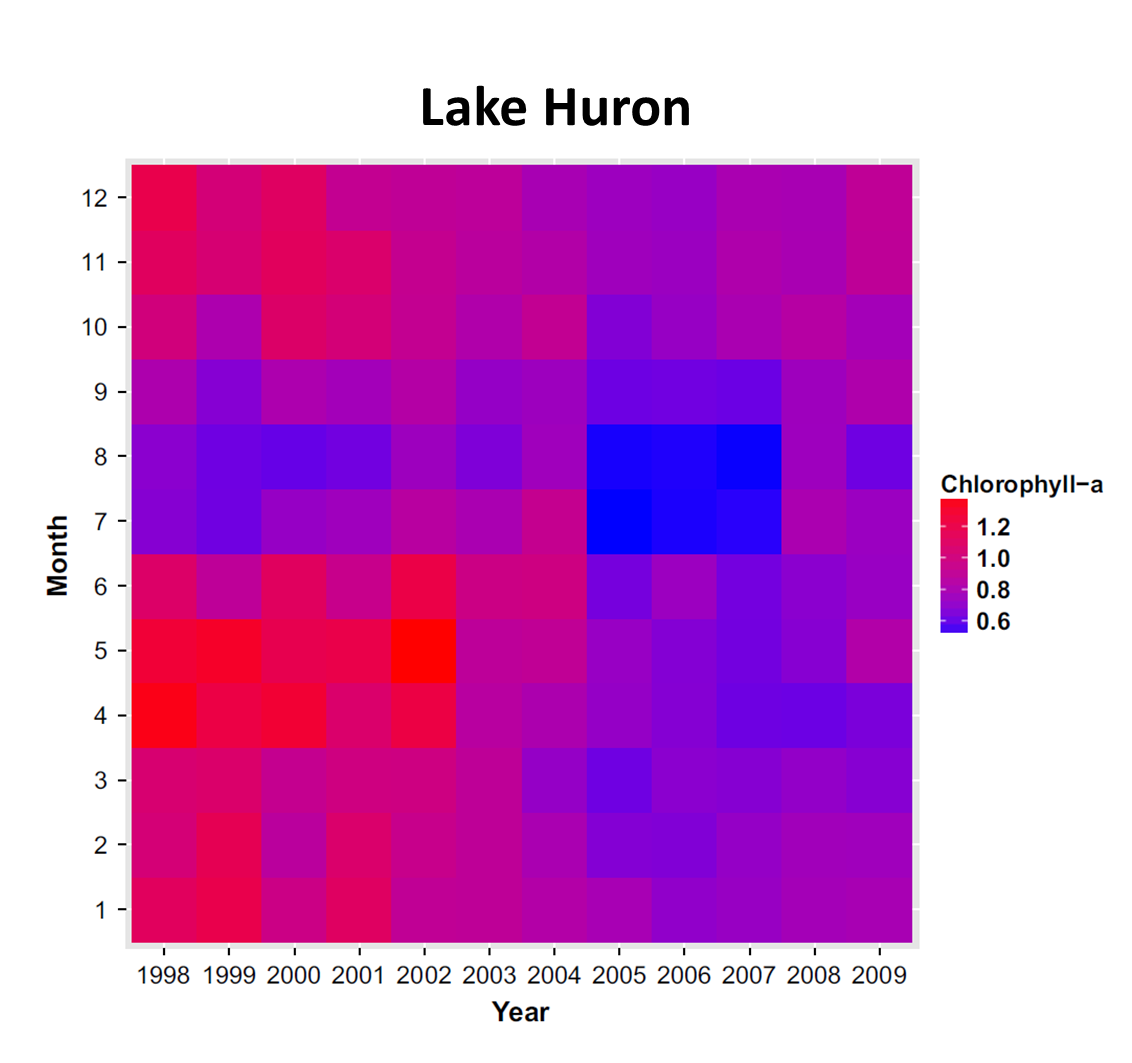 Monthly mean Chlorophyll-a (µg/L) in Lake Huron, 1998_2009. The image shows decreases in chlorophyll-a during most months of the year beginning in 2003.  However, two particularly large changes can be seen in spring (April and May) and summer (July and August), which are each due to different causes. The causes for the spring decline were reduced total phosphorus concentration and filtering by invasive dreissenid mussels, while the summer decline resulted from decreased total phosphorus concentrations and variation in precipitation in the lake basins.  The spring decrease corresponds to the disappearance of the spring diatom bloom, which historically provided the primary pulse of lipids to many invertebrates that consume phytoplankton and are valuable food for fish.  These changes in the productivity of the lakes have led to a reduction in the carrying capacity of important fish species and persist.