The Monitoring Trends in Burn Severity (MTBS) project is a collaborative effort between the U.S. Forest Service (USFS) Remote Sensing Applications Center (RSAC) and the USGS Earth Resources Observation and Science (EROS) Center. In 2006, the Wildland Fire Leadership Council tasked MTBS to assess burn severity for all known large fires (i.e.,  ≥500 ac in the east, ≥1000 ac in the west) that have occurred on any land ownership in the United States since 1984. This information helps identify the trends and impact of fire in the United States and is used to support other fire-related programs like LANDFIRE, the Landscape Fire and Resource Management Planning Tools program.

Landsat data from the archive at USGS EROS are being analyzed to accomplish this task. The Normalized Burn Ratio (NBR) is computed for Landsat scenes acquired before and after each fire. The differenced NBR (pre-fire NBR minus post-fire NBR) is assessed to evaluate the level of severity of the fire-caused change to the vegetation. On October 1, 2014, RSAC released 563 fire assessments to the MTBS Web site. This release included 406 fires from 2013 from across the United States and 157 historical fires from Texas. This release brings the total to 18,497 fires that have been mapped across the United States and Puerto Rico. Another release for spring 2015 includes over 1,800 historical U.S. Fish and Wildlife Service fires mapped by the USGS EROS over the past 2 years. The MTBS project provides a basis for local, regional, and national assessment of fire and its short- and long-term impacts upon the landscape. 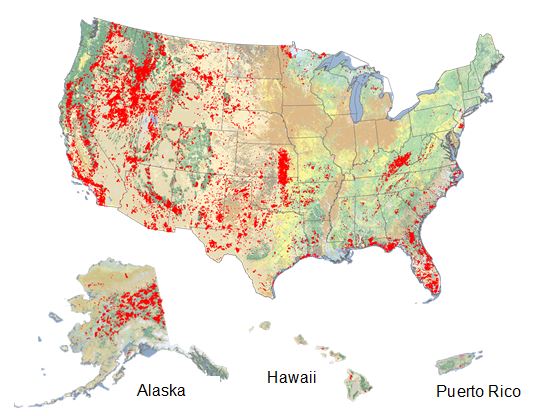 The red areas represent the almost 18,500 large fires mapped by the Monitoring Trends in Burn Severity project as of October 1, 2014. Large fires are defined as 500 acres in the eastern U.S., and 1000 acres in the west.