The  20- x 10-mile Long Valley caldera in eastern California formed from a “super eruption” about 760,000 years ago, and is considered a Very High Threat volcano by the USGS Volcano Hazards Program. Since 1978, several periods of seismic and deformation unrest have been detected at this well-monitored volcano but have not resulted in eruptions. A period of slow inflation concentrated within the Long Valley caldera began in late 2011, coinciding with renewed swarm seismicity. Analysis of the deformation over 3 years by a combination of GPS and Interferometric Synthetic Aperture Radar (IfSAR) (TerraSAR-X) data processed using a persistent scatterer technique allows a comparison of the present uplift episode with past episodes, shows good correlation with ground-based deformation measurements, and defines a persistent, elongated spheroidal magma reservoir ~7 km (~4.3 mi) beneath the resurgent dome through modeling. IfSAR aids in developing a regional picture of baseline unrest, which will help volcanologists characterize the range of deformation activity in the Long Valley caldera. 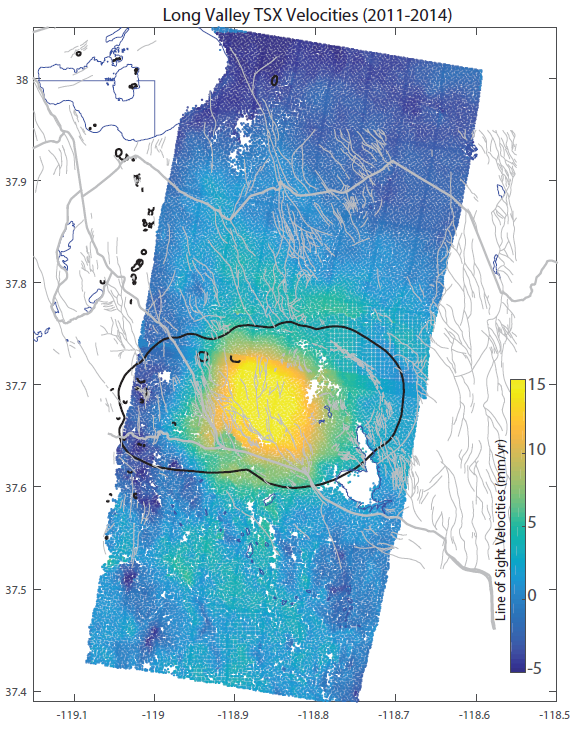 TerraSAR-X deformation velocities determined from 22 interferograms spanning 2011 to 2014. The line-of-sight velocities show inflation of up to 15 mm/yr under Long Valley's resurgent dome. For orientation, Mono Lake, California, is located in the northwest corner of the image, and north is at the top of the image.