High spatial resolution imagery from the National Agricultural Imagery Program (NAIP) was used to capture the landscape disturbance related to hydraulic fracturing (“fracking”) and other forms of hydrocarbon extraction activity throughout the Marcellus Shale region of Pennsylvania from 2004 to 2010. Specific topological features such as well pads, pipelines, and roads were digitized and developed into a temporal geographic information system (GIS) database to characterize the spatial footprint of unconventional (hydraulic fracturing) and conventional oil and gas development. USGS scientists used these data to measure the spatial extent of oil and gas development and to assess the exposure of the extant natural resources across the landscape of the watersheds in the study area. Scientists found that either form of development (1) occurred in ~50% of the 930 watersheds that defined the study area; (2) was closer to streams than the recommended safe distance in ~50% of the watersheds; (3) was in some places closer to impaired streams and state-defined wildland trout streams than the recommended safe distance; (4) was within 10 upstream km of surface drinking water intakes in ~45% of the watersheds that contained surface drinking water intakes; (5) occurred in ~10% of state-defined exceptional value watersheds; (6) occurred in ~30% of the watersheds with resident populations defined as disproportionately exposed to pollutants; (7) tended to occur at interior forest locations; and (8) had > 100 residents within 3 km for ~30% of the unconventional oil and gas development sites. Furthermore, scientists found that exposure to the potential effects of landscape disturbance attributable to conventional oil and gas development was more prevalent than its unconventional counterpart. 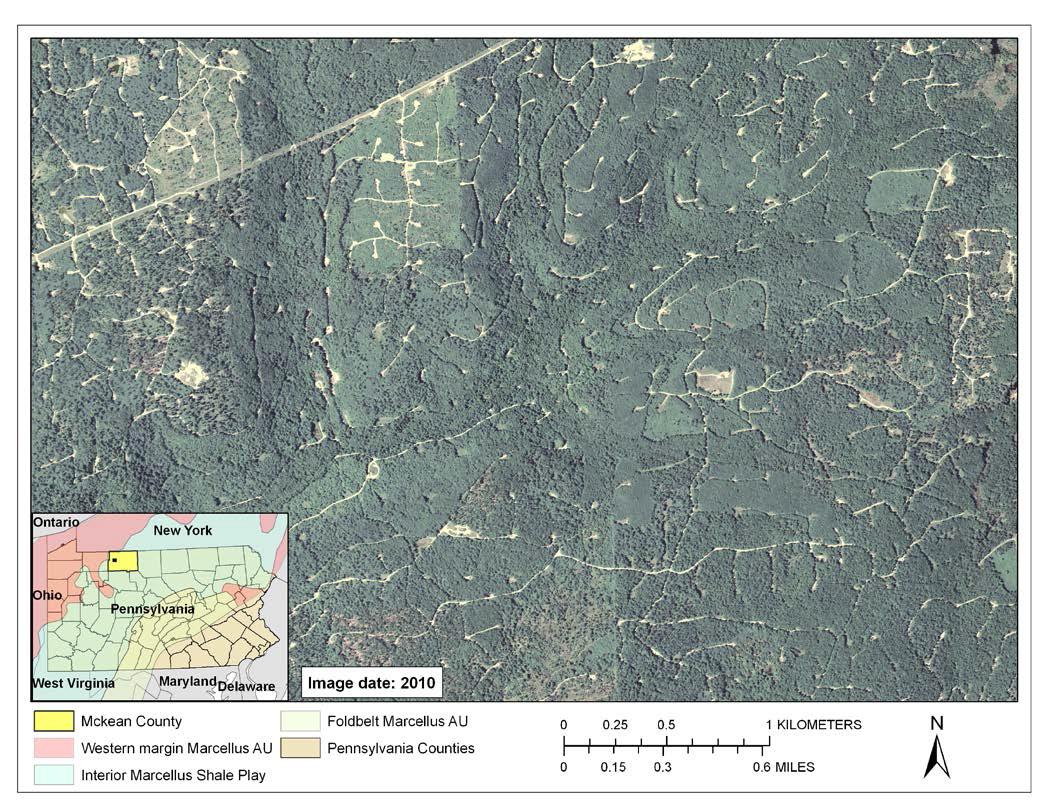 A forested landscape in McKean County, Pennsylvania, showing the distribution of roads, well pads and pipelines related to combined hydrocarbon development. This particular pattern of disturbance is primarily the result of conventional oil and gas development but highlights the combined effects of decades of hydrocarbon extraction in Pennsylvania. Source: National Agricultural Imagery Program.