River floods are an essential source of water and nutrients for lowland lakes in interior Alaska, where precipitation rates are low and water deficits are common. Ice-jam floods are particularly important because they produce water levels well above those caused by open-water floods and are therefore more likely to have a wider impact on low-lying lakes. Propagation of floodwaters across the lowlands is strongly controlled by the distribution of both seasonally frozen ground, which limits vertical infiltration into the subsurface (widening the initial flooding zone of influence), and permafrost, which limits the shallow subsurface lateral transfer of water between lakes along a hydrologic gradient (narrowing the ultimate flooding zone of influence). Time sequences of lake surfaces derived from Landsat 5, 7, and 8 images draped over a 2.5-m lidar digital elevation model (DEM) in the Yukon Flats reveal temporal and spatial patterns in lake expansion and contraction that are connected to major river flooding events, including ice-jam flooding, and shallow permafrost distribution. Changes in ice-jam flooding (both intensity and frequency) and degradation of shallow permafrost are expected with continued climate warming. The remotely sensed observations are guiding modeling efforts to better understand potential consequences to lowland lake systems of discontinuous permafrost expansion forecast in response to global warming. 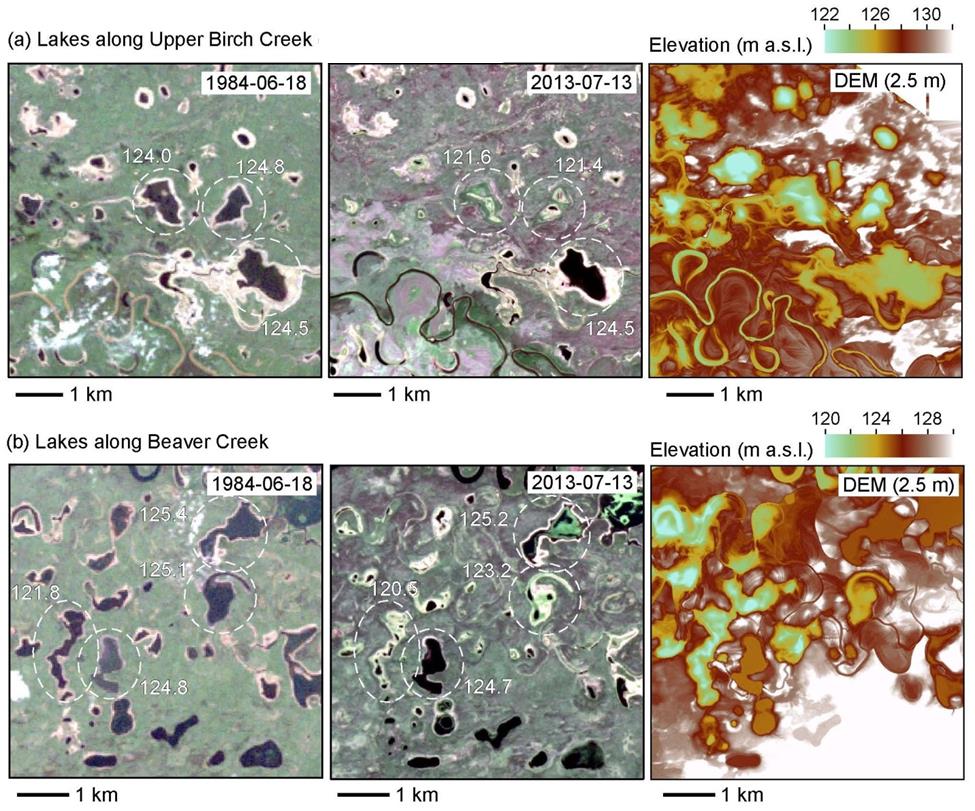 Examples of spatially varying changes in lake surface elevation in Yukon Flats, Alaska, based on Landsat imagery (USGS, 2013) and the 2.5-m lidar DEM. Lakes along (a) Upper Birch Creek and (b) Beaver Creek are located near the floodplain-terrace transition. (a) Upper surface elevations of circled lakes are labeled.