The Volcano Disaster Assistance Program (VDAP) is the international aid arm of the Volcano Hazards Program funded through the U.S. Agency for International Development Office of the U.S. Foreign Disaster Assistance (USAID/OFDA) to build capability and respond rapidly to developing volcanic crises in developing democratic countries where active volcanoes pose a threat to communities. Volcano crises that do not require an on-site presence by VDAP often involve consultation and provision of satellite imagery and analysis. One way that VDAP assists with satellite imagery is through managing the International Charter for Space and Major Disasters on behalf of partner agencies to facilitate real-time monitoring and rapid decision making for emergency managers. A recent activation of the International Charter was for Sinabung volcano in northern Sumatra, Indonesia. Previously unmonitored and unrecognized, Sinabung stirred to life in 2010 after centuries of dormancy. During a particularly harrowing period of lava extrusion accompanied by lava flow collapse and pyroclastic flows, VDAP activated the International Charter on behalf of Indonesia’s Center for Volcanology and Geological Hazards Mitigation (CVGHM). The imagery allowed emergency responders and civil defense personnel to coordinate changing evacuation requirements and refugee centers, protecting the lives of the more than 300,000 people who live around the volcano. 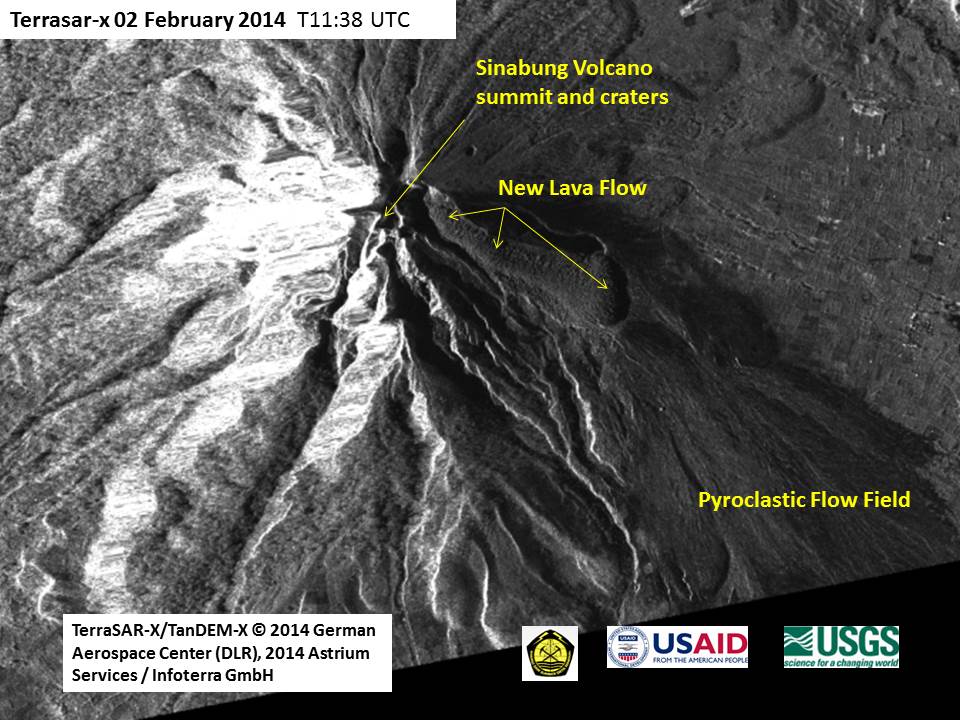 In the tropics where cloud cover is persistent over the mountains, such as northern Sumatra, Synthetic Aperture Radar (SAR) imagery has been used successfully as the eyes of volcano scientists who closely watch the developments and evolving hazards of volcanos like Sinabung. In this image, the new massive lava flow has descended the upper slopes of Sinabung and the frequent pulses of hot flowing rock, ash, and gas in the form of pyroclastic flows and surges have spread out to inundate the lower slopes of the volcano edifice. These depostis decimated numerous villages and croplands on the southwestern, southern, and western slopes within 5–6 km of the summit. In this image example, the data come from the German space agency Deutsches Zentrum für Luft und Raumfahrt (DLR) and were delivered to volcano scientists within 24 hours of satellite flyover.  Updates to the emergency managers followed immediately. The International Charter allows for the best available satellite data to be used as real-time monitoring data, and VDAP and the USGS take full advantage of this arrangement. North is oriented toward the top in this image.