Modeling of Magma Intrusion in Hawaii with IfSAR

Kilauea volcano on the island of Hawaii has been erupting continuously since 1983, providing volcanologists with unprecedented data on the internal “plumbing” of this shield volcano through which magma (molten rock) can travel. In early May 2015, deformation data, seismic data, and an abrupt drop in the level of the lava lake in Kilauea’s summit crater suggested movement of magma from beneath the summit to beneath its upper Southwest Rift Zone. Interferometric Synthetic Aperture Radar (IfSAR) data confirmed this movement when two COSMO-SkyMed synthetic aperature radar images taken a few weeks apart with the same imaging geometry were superimposed to create an interferogram pinpointing the area of uplift caused by magma intrusion. IfSAR can provide a valuable regional view of deformation on a volcano to complement data from ground-based monitoring instruments and provide an opportunity to model magma volume and depth, refining our understanding of the inner workings of volcanoes. 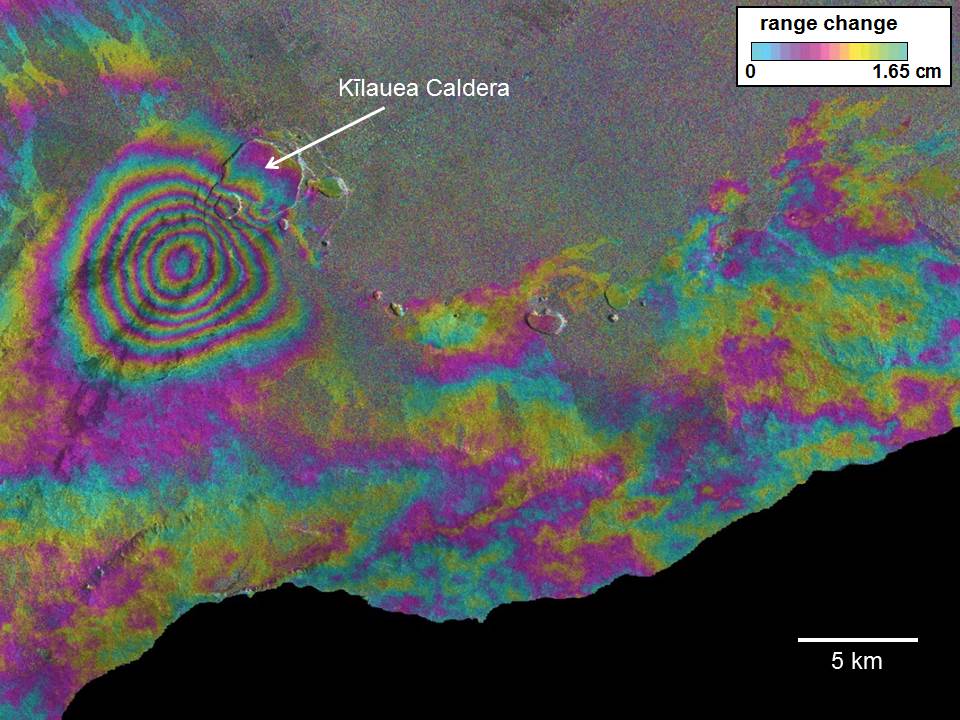 This interferogram is from COSMO-SkyMed synthetic aperature radar data acquired on April 11 and May 22, 2015. The concentric pattern of fringes in the southern part of Kilauea caldera indicates inflation due to an intrusion of magma in the upper Southwest Rift Zone area in mid-May. The inflation was also detected by GPS and tiltmeters on the volcano, but the spatial resolution of IfSAR facilitated modeling of the event. Preliminary model results suggest a depth of 3.3 km and a volume increase of 5.5 million m3. These data were supplied as part of the global Group on Earth Observations Supersite initiative and would not otherwise have been available.