Mass losses from Alaska’s glaciers are both locally and globally important in terms of downstream ecosystem impacts and sea-level rise. Generating regional mass balance estimates is challenging due to the remote and rugged geography and the variable response of individual glaciers to climate change. In Alaska, various glaciers have been profiled with airborne laser altimetry since 1994.  Researchers from the USGS Alaska Science Center Glaciology Research Group and the University of Alaska Fairbanks collaborated on a new analysis of those data. Using repeat profiles from 116 glaciers, they estimated a regional mass balance of –75 ±11 gigatons per year for the period 1994–2013. For the first time, these data allow the partitioning of regional mass balance by glacier type. Tidewater glaciers are losing mass at substantially slower rates than other glaciers in Alaska and collectively contribute to only 6% of the regional mass loss. 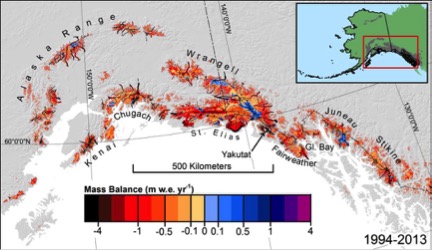