An underwater laser scanning demonstration project was completed in March 2016 in  BOR’s hydraulics laboratory in Denver, Colorado.  The purpose of the project was to evaluate the capability of an underwater laser scanning system in a turbid water application.  Turbid water can dramatically reduce the laser range because particles in the water attenuate the laser backscattered signal.  The demonstration project was a training opportunity to perform a laser survey and process two point cloud scans into a 3D model.  The laser scanning system performed as expected, but turbid water reduced the scanning range to less than 5 feet.  The image shown is the 3D point cloud model of a 3-inch-diameter PVC pipe and a variety of submerged objects placed in the 9-foot-wide and 6-foot-deep water channel.

This demonstration project is part of an ongoing Department of the Interior Dam Safety Program technology development project to develop underwater imaging capabilities, including laser and sonar scanning, for underwater inspections and surveys.  A copy of the technology development report is available at http://www.usbr.gov/ssle/damsafety/TechDev/DSOTechDev/DSO-14-06.pdf. 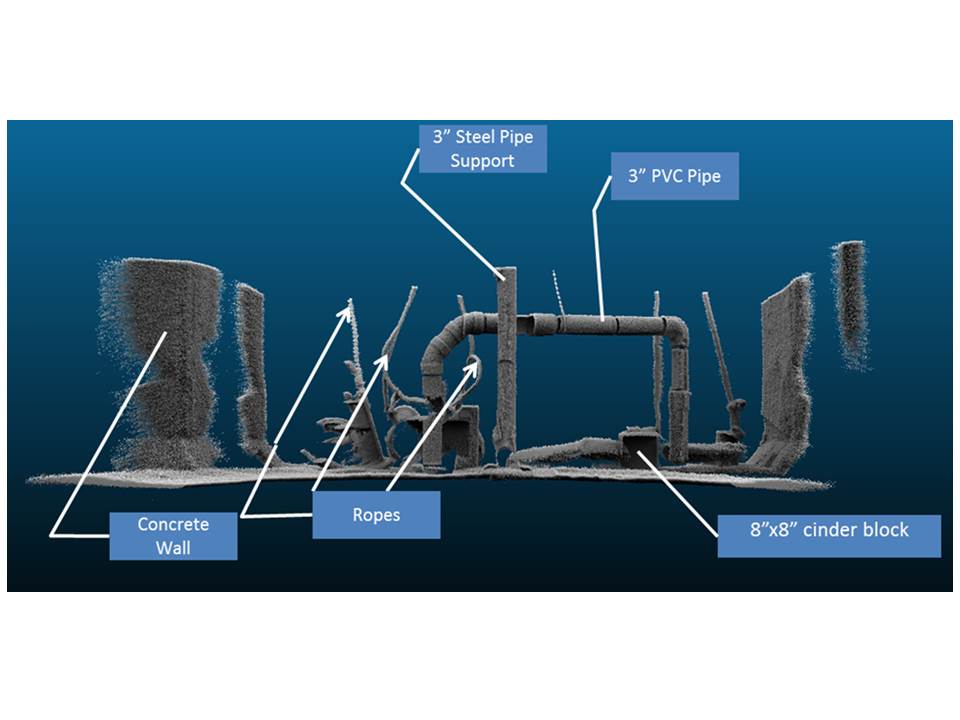 Image of two high-resolution point clouds merged to create a 3D model of several submerged objects in a rectangular concrete channel. Areas of incomplete coverage resulted from limited laser range and interference from adjacent objects.  Typically, four or more point cloud scans would be needed to obtain complete coverage of a complex structure.