In 2009, the Sea Duck Joint Venture (SDJV)  launched an ambitious, large-scale satellite telemetry study of sea ducks in the Atlantic Flyway.   Target species include black scoter, surf scoter, white-winger scoter, and long-tailed duck, all of which are species of conservation concern.  The overall goal of the study is to improve understanding of the links among breeding, wintering, staging, and molting areas (i.e., population delineation) for these species, which is essential to understanding sea duck population declines and limiting factors.

To date, more than 450 transmitters have been surgically implanted in sea ducks, providing location data every few days for up to 2 years.  Ducks are captured using a variety of techniques, including mist-netting, net-gunning, and night-lighting.  Capture and marking efforts have been highly successful for black scoters and surf scoters, and most objectives have largely been met for these species.  The focus has now shifted to long-tailed ducks and white-winged scoters, with crews slated to trap in the St. Lawrence estuary, Quebec, Canada, and around Cape Cod, Massachusetts, in 2016/2017.

The ongoing study is generating a wealth of detailed information on coastal and marine areas used by sea ducks throughout the year and is greatly improving understanding of migration patterns and range affiliations for sea ducks in eastern North America. Some of the more notable results include 1) documentation of a previously unknown major breeding area for black scoters west of Hudson Bay and in Hudson Bay lowlands, and 2) documentation of the importance of Chaleur Bay in New Brunswick and Quebec, Canada, and the St. Lawrence estuary, as staging areas for high proportions of all species marked.  In addition, the study is identifying sea duck spatial and temporal habitat preferences, thus helping to evaluate potential impacts from development, harvest, and climate change.  This project is complementary to other ongoing studies of marine birds in the Atlantic, including a Bureau of Ocean Energy Management study assessing diving bird use of offshore areas along the mid-Atlantic coast.

More information about the study can be found at http://seaduckjv.org/science-resources/atlantic-and-great-lakes-sea-duck.... 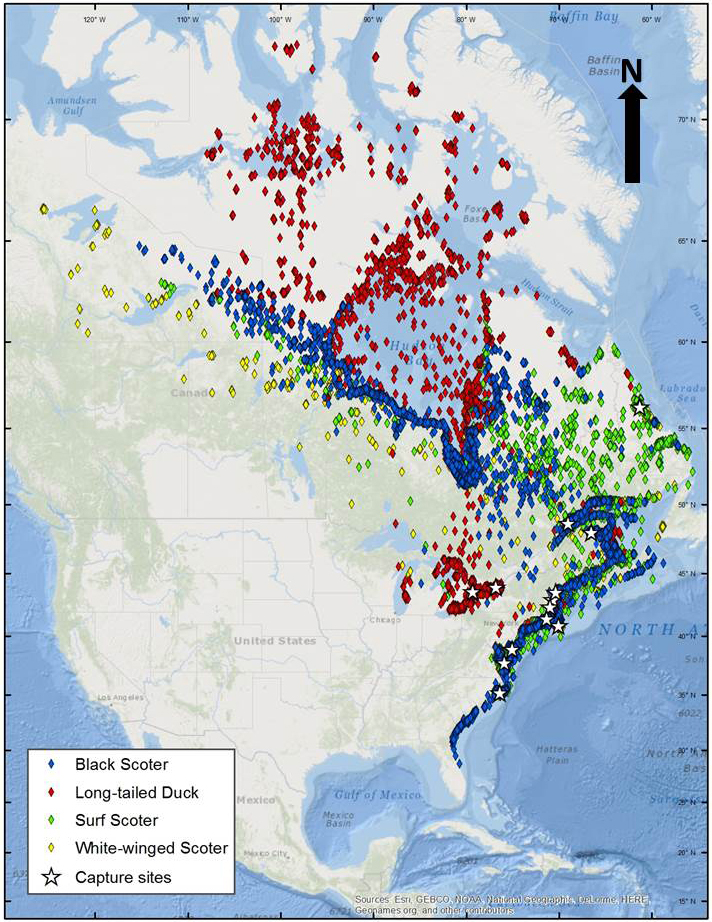