Two-dimensional imagery from satellites and airborne sensors has been an invaluable resource to the scientific understanding of ecosystems. With technologies such as lidar and Interferometric Synthetic Aperture Radar (IFSAR), a third vertical dimension has been added to these data.  Forest structural parameters such as tree density, height, and arrangement have a substantial effect on ecosystem functions and health, and the ability to have a more complete understanding of ecosystems over large areas has created a demand for such data. Lidar and IFSAR data are expensive, making repeat acquisition cost prohibitive. Recent advances in photogrammetry, however, have added a cost-effective method for collecting forest structure data using Structure from Motion (SfM) algorithms with traditional aerial photography.

In an effort to further reduce acquisition cost and improve 3D data, FWS scientists have been testing dual-oblique camera configurations. Instead of the standard nadir setup, with cameras pointed straight down,  dual cameras were tilted at opposite angles of both 10 and 15 degrees. Images were taken using medium format Nikon D810 cameras. Point clouds and orthomosaics were produced using Agisoft Photoscan software. The 10 degree oblique configuration performed better than the 15 degree configuration, producing a slightly better point cloud and a superior orthomosaic. In particular, tree lean was quite apparent at the seamlines of the 15 degree configuation. Using dual cameras angled at 10 degrees produced results comparable to nadir and reduced acquisition time by 30%. With acquisition costs less than 10 cents/acre, it is feasible to resample areas for research and monitoring projects. 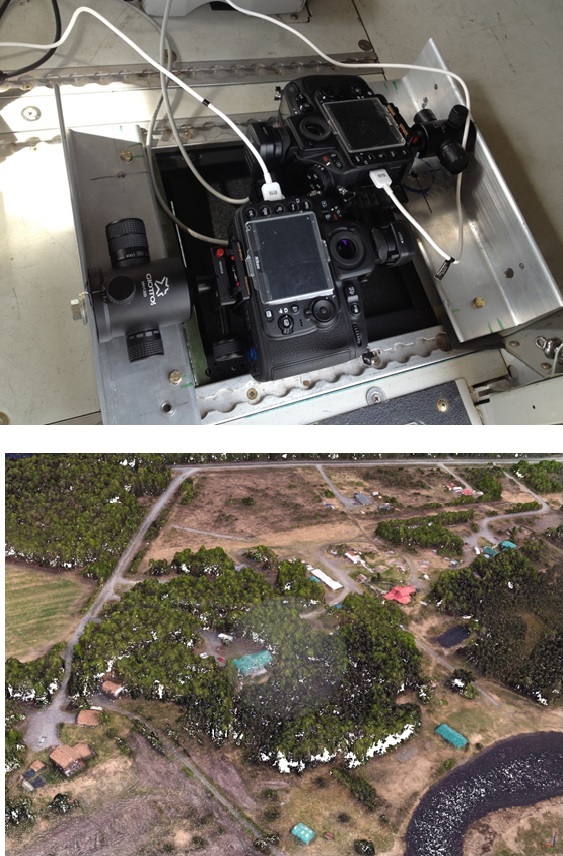