Dauphin Island, Alabama, is a strategically important barrier island along the northern Gulf of Mexico in large part because it serves as the only barrier island providing protection to much of Alabama’s coastal natural resources. The size of the system spans over 200 acres of evolving barrier island habitat including beach, dune, intertidal wetlands, maritime forest, and freshwater ponds. In addition, Dauphin Island provides protection to approximately one-third of the Mississippi Sound and estuarine habitats including oyster reefs, marshes, and seagrasses. The island has been severely impacted by repeated extreme events over the past several centuries, most recently Hurricanes Ivan, Katrina, and Isaac, and by the Deepwater Horizon oil spill. The State of Alabama, the USGS, and the U.S. Army Corps of Engineers (USACE) are conducting a joint study to evaluate feasibility level alternatives to increase the resiliency and sustainability of Dauphin Island. The overarching goal is to preserve and enhance the ecological functions and values of the island and associated estuarine resources the barrier island helps to maintain.

The USGS Wetland and Aquatic Research Center (WARC) and the USGS St. Petersburg Coastal and Marine Science Center (SPCMSC) are leading several tasks under the feasibility study. Of these tasks, numerous efforts involve the use of remote sensing data. The SPCMSC will use aerial photography and satellite imagery to delineate short-term and long-term trends in shoreline change. The SPCMSC will also experiment with high-resolution imagery to produce maps of vegetated island cover that can serve as input for frictional characteristics in numerical models and for trend analysis of general barrier island habitats. The WARC will visually map barrier island habitats from high-resolution aerial photography acquired in 2015 and 1998. The 1998 habitat map will then be used to train and develop a habitat model that couples topographic position information (i.e., elevation, slope, distance from shoreline, etc.) with hydrodynamic output data developed by the SPCMSC; the 2015 habitat map will be used for validation. The habitat model will be coupled with hydrodynamic model outputs developed by researchers at the SPCMSC for modeling barrier island habitats in the future for various restoration alternatives. 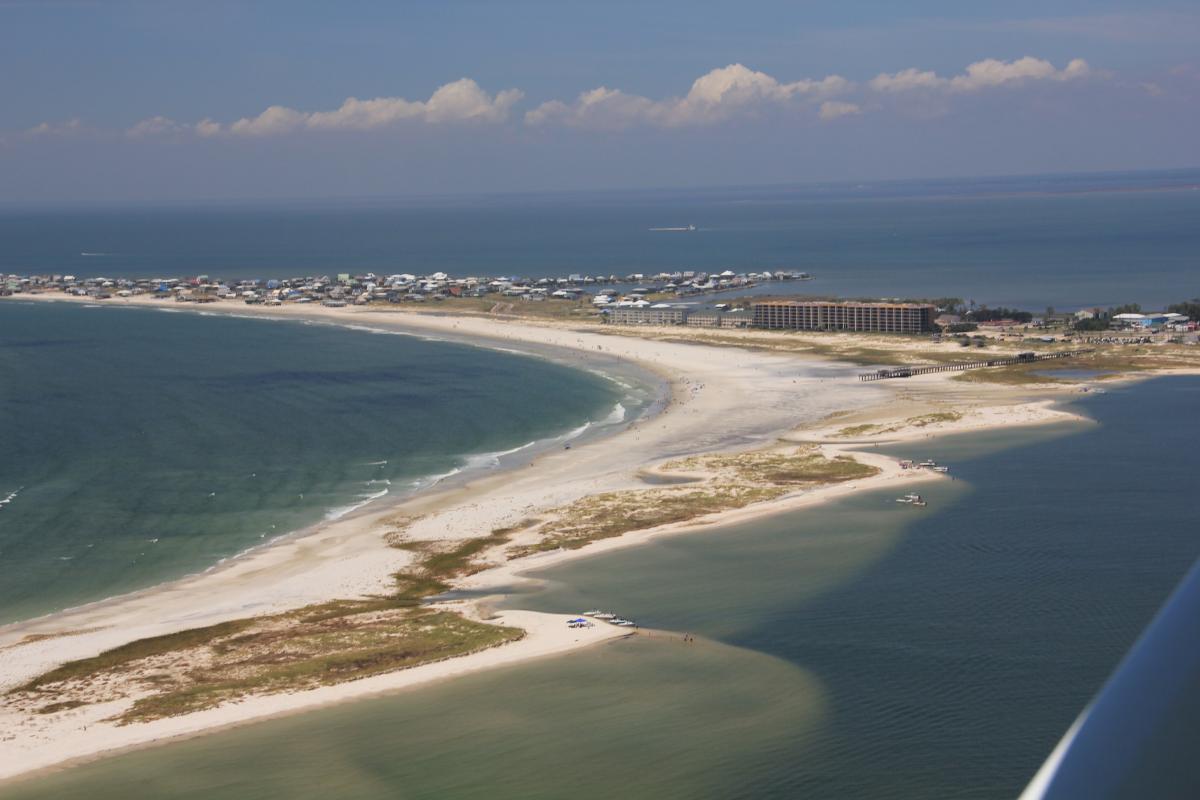 Oblique aerial photograph of Dauphin Island, Alabama, from 2012 (Morgan and Westphal, 2016; http://pubs.usgs.gov/ds/0988/). The view is toward the north-northwest, with Pelican Passage to the east; the mainland is visible in the distance.