The Cold War era Keyhole (KH) satellite surveillance system, KH-9 Hexagon, operated from 1971 to 1984, recording imagery at a resolution of 2-4 feet along a swath 425 miles wide.  As with the precedessor CORONA system, images were recorded on rolls of photographic film, which were subsequently ejected from the orbiting satellite in a capsule.  Military aircraft recovered each capsule as it re-entered the Earth’s atmosphere by snagging its attached parachute with grappling hooks. Most of the image collection was declassified in 2011.  The first 1,700 Declass-3 redacted images of the KH-9 Hexagon mission were digitized and released through the online USGS EarthExplorer image portal on September 15, 2015.  As of July 2016, there are now more than 15,000 scenes available to the public. The collection being worked is a subset that was previously held by the USGS Advance Systems Center (ASC) in Reston, Virginia.  All of the Declass-3 frames are being offered as on-demand film scans at $30 per image (7-micron scans for black and whites and 14-micron for color infrared images). 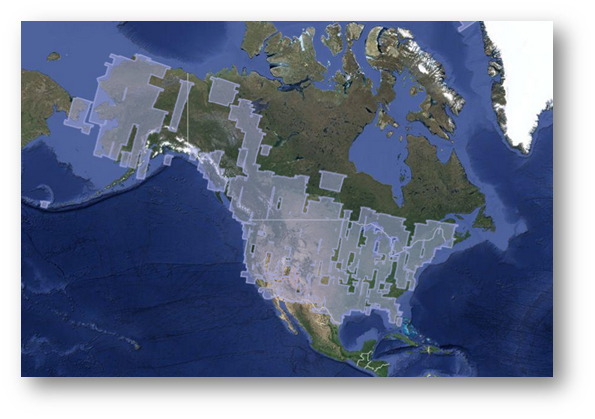 EarthExplorer screen capture of the Declass-3 collection for the period ending June 30, 2016.