In March 2011, USGS and U.S. Fish and Wildlife Service (USFWS) biologists conducted a pilot project designed to estimate the abundance of sandhill cranes (Grus canadensis) at one roost at the Monte Vista National Wildlife Refuge in Colorado. The Refuge is an important fall and spring migration area for sandhill cranes; almost the entire Rocky Mountain population stages there every spring. Historically, most aerial migratory bird surveys have been conducted using pilots and observers seated in fixed-wing or rotary aircraft, who identify and count birds using ocular estimation techniques. The number of skilled pilots/observers is limited, however, and the USFWS was interested in exploring cost-effective and safe alternatives to ensure they meet their trust responsibilities of assessing the status of all migratory bird species. This trial effort to use a small Unmanned Aerial System (sUAS) to assess crane abundance was an unqualified success, with the resulting estimate only 4.6% different than ground counts conducted by biologists, justifying further development and testing of techniques.

Based on the success of the 2011 project, the first-ever nighttime sUAS flights were conducted in March 2012. There are advantages in surveying cranes at night because the birds roost in concentrated groups on shallow wetland sites and are relatively stationary. These surveys need to be completed in one night, however, because major inter-roost movements can occur between successive nights that would result in biased abundance estimates.  The team completed flights over the primary roosts in less than 6 hours, using 47 parallel transects spaced to optimally capture thermal imagery for analysis.  The 2012 flights resulted in an estimate of 14,658 cranes occupying the five roost sites. To compare crane abundance estimated from two potentially useful platforms, in March 2016 flights were conducted over the same roost areas at the Refuge during one night with both sUAS and a manned, fixed-wing aircraft carrying a Forward Looking Infrared (FLIR) camera system. Imagery from the FLIR platform was collected first, and data collection by the sUAS was initiated immediately subsequent to the FLIR work. Image processing and analysis is currently being conducted; once complete, managers and researchers will have better data to assess which platform may best meet their needs based on the size of the area to be surveyed, cost, and safety considerations. 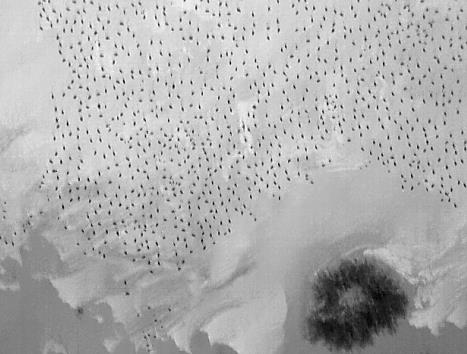