Free Landsat Data Prove Their Worth for Observing Earth

At four decades of uninterrupted data acquisition, Landsat images represent the longest continuous record of Earth’s land surface as seen from space.  Scientists and resource managers have long leveraged this unparalleled, ever-lengthening time series to monitor a diverse range of Earth system processes and phenomena. Since late 2008, when the Department of Interior opened the Landsat archive to all users free of charge, nearly 40 million Landsat scenes have been downloaded through the USGS portal—and the rate of downloads is increasing.

The ability to access the full Landsat archive at no cost has also fueled the creation of purpose-driven data applications—known on mobile devices as “data apps”—that provide environmental and societal benefits.  Researchers around the world in government, in the private sector, and at universities and institutions have generated data applications that can serve commercial endeavors in agriculture and forestry, enable land managers to work more efficiently, and help to define and address critical climate and environmental issues.

To give a few examples of Landsat’s many commercial applications, Landsat data have been used to track the use of irrigation water, to assist drought-stricken California grape growers, and to contribute to the success of a forestry start-up company. As an indication of widespread public interest in Landsat data, third party avenues to the data and innovative ways to use these data are available from Amazon, Esri, and Google.

In the United States, the Federal Government invests about $3.5 billion annually in civil Earth observations and data (including Landsat and other satellites such as weather and GPS) across multiple agencies, while optimizing related investments that are also made by State, local, and Tribal governments, academia, and industry. The information derived from Earth observations supplies the foundation for scientific advances in many fields and enables multiple Federal agencies and partners to carry out their missions. Federal investments in various aspects of Earth observations are conservatively estimated to add $30 billion to the U.S. economy each year by providing Americans with critical knowledge about natural resources, climate and weather, disaster events, land use change, ecosystem health, ocean trends, and many other  Earth-related phenomena. 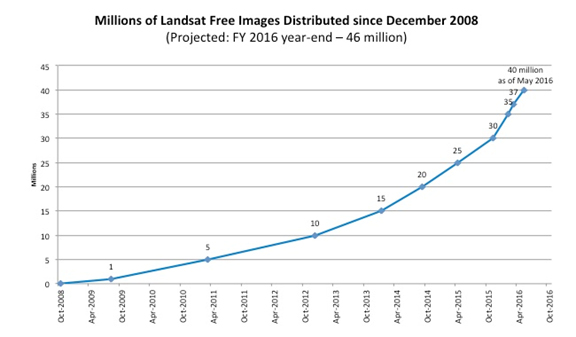