National Park Service (NPS) water clarity data were recently combined with Landsat remote sensing data to hindcast turbidity trends in Lake Clark for a 30-year time period (1985–2014). Lake Clark is a glacially influenced nursery lake for sockeye salmon, located in the headwaters of Bristol Bay, Alaska, the most productive wild salmon fishery in the world. Water clarity is a key water-quality property in salmon-bearing lakes. Decreases in water clarity due to increases in glacial runoff have been shown to reduce salmon production by lowering the abundance of prey such as zooplankton. Anecdotal accounts suggest that Lake Clark water clarity is decreasing over time, but no long-term measurements exist to substantiate these observations.

This study addressed that data gap by reconstructing long-term, lakewide water clarity for Lake Clark using the Landsat Thematic Mapper (TM) and Enhanced Thematic Mapper Plus (ETM+) surface reflectance products and in-situ water clarity data. No significant change was detected in the mean annual turbidity of Lake Clark for the time period examined. However, a significant positive trend in May turbidity was found between 2000 and 2014, which could represent an advance in the timing of initial sediment input to the lake via glacial meltwater runoff.

This study demonstrates the utility of hindcasting turbidity in a glacially influenced lake using the Landsat surface reflectance products. It may also provide a framework for reconstructing turbidity records in lakes that lack in-situ observations, and it can be a starting point for predicting future water clarity conditions based on projected climate scenarios. 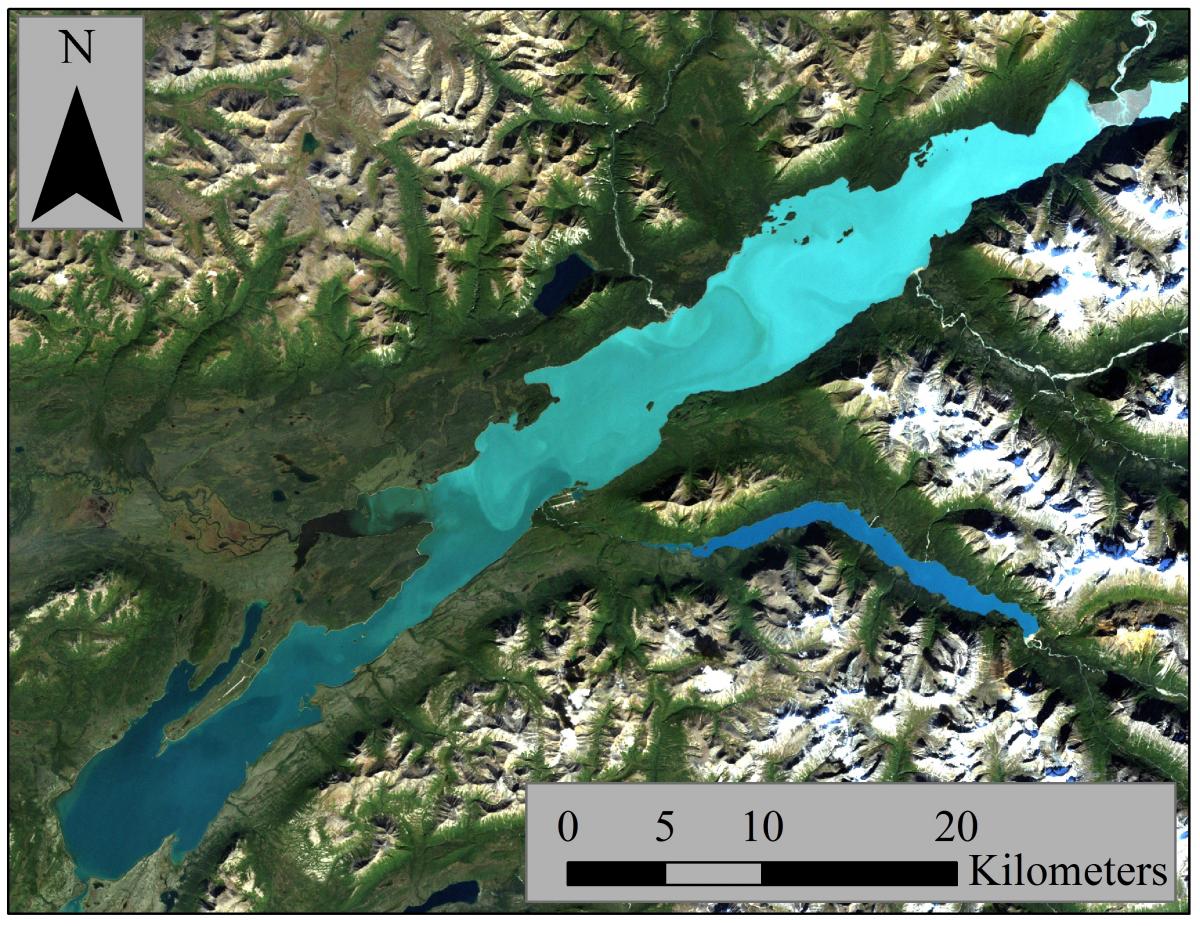 Lake Clark as seen from Landsat 7 on September 6, 1999. This "true" color composite utilizes band 1 as blue, band 2 as green, and band 3 as red, and is adjusted to highlight contrasts in water clarity. Light blue water represents sediment-laden water. The darker the water, the less suspended sediment. The image exquisitely demonstrates the prominent sediment plume that was the subject of this study. The plume originates from the northeastern end of the lake (top right corner) and extends to the southwest.