Located 15 mi east of Rock Springs, Wyoming (41.6641°, -108.9526°) the Pierotto irrigation diversion on Bitter Creek is threatened by stream erosion and undercutting. The diversion was constructed in 1950, rebuilt multiple times in the 1960s, then temporarily stabilized with a large cement and steel structure in the mid-1970s. The multiple iterations of this structure have slowed the upstream migration of several vertical channel drops (headcuts).  The first headcut formed at least 60 years ago, likely due to downstream disturbances and channel straightening associated with railroads and domestic, industrial, and agricultural developments. Continued headcutting and channel widening over many years resulted in a current 5-m drop below the diversion structure, which continues to migrate upstream and undermine the diversion structure itself (A). Failure of the structure would damage the watershed upstream, threatening the railroad and other infrastructure as well as important riparian habitat.

The BLM used an orthomosaic and digital surface model (DSM) created from Unmanned Aerial System (UAS) imagery to quantify the extent of headcut impacts and plan for mitigation efforts. The UAS imagery was collected in June 2016 as stereo aerial imagery covering 40 acres surrounding the Pierotto headcut with a 2-cm ground sample distance (GSD). These data revealed that the headcut movement, documented from historical aerial imagery as having moved 49 m in 60 years, had sent approximately 125.0 m3/m of sediment downstream. Construction of an alternate graded channel with grouted rip rap began in November 2016 (B), with Bitter Creek temporarily diverted through an irrigation canal (C). The winter of 2016-2017 brought more than double the normal precipitation to the Bitter Creek watershed, and subsequent runoff severely damaged the temporary channeling and structures put in place to accommodate Bitter Creek during construction, cutting a new 450-m channel that bypasses the construction area (D). A repeat UAS flight conducted by BLM in June 2017 acquired 1-cm GSD imagery and showed the extent of erosion in the system. The resulting DSM showed that approximately 15,000 m3 of soil eroded from the new channel (D), most of it filling in the channel bed just downstream (E). The orthoimagery and DSM are currently being used to plan for further mitigation on this system. 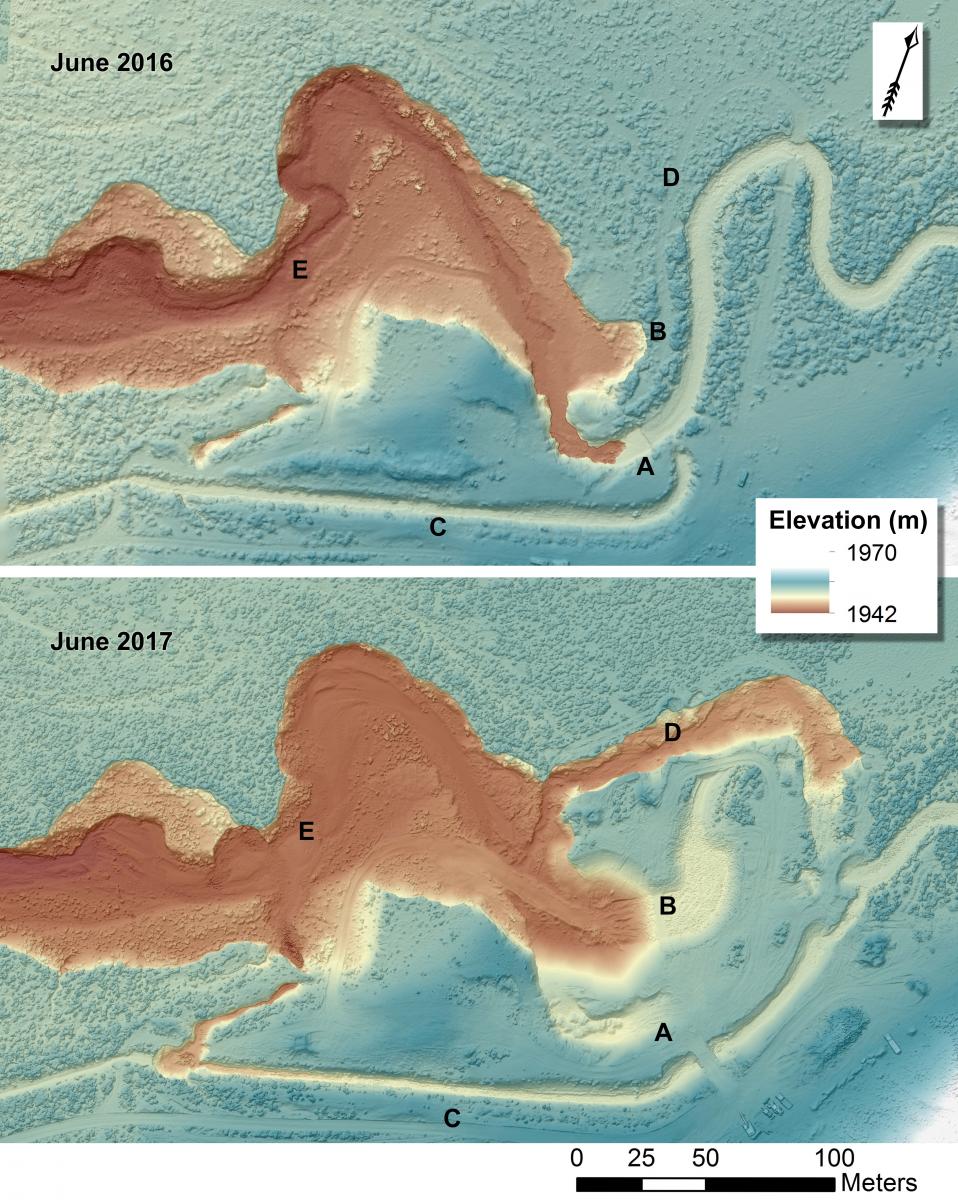