Documenting bird and bat migration is challenging because migration activity is sporadic and nocturnal migrants (i.e., most aerial migrants) are difficult to observe. The FWS uses avian radar to monitor the timing, duration, and activity patterns of birds and bats as they move through the Great Lakes (https://www.fws.gov/radar).  Each radar unit has a horizontal antenna that scans 360° just above the horizon and a vertical antenna that scans a vertical slice of the sky.  In the spring of 2017, radar units were deployed along Lake Michigan in Chicago and northern Indiana. This is the first season of monitoring migration in a heavily urban area, and FWS scientists are interested in how birds move through the urban setting and make use of the limited green space along the shoreline.

At both sites, FWS scientists observed large numbers of migrants moving in relatively consistent directions at night, migrants shifting direction to fly in toward shore at dawn, and flight at altitudes that extend well above 1 km (vertical antenna image on the right extends to 2,800 m).  Altitudes used by migrants highlight the current and future conflicts between migration and anthropogenic use of airspace (e.g., buildings, communication towers, wind turbines). Data and information derived from this project will help inform decisions to balance the needs of coastal development with the need to protect wildlife. 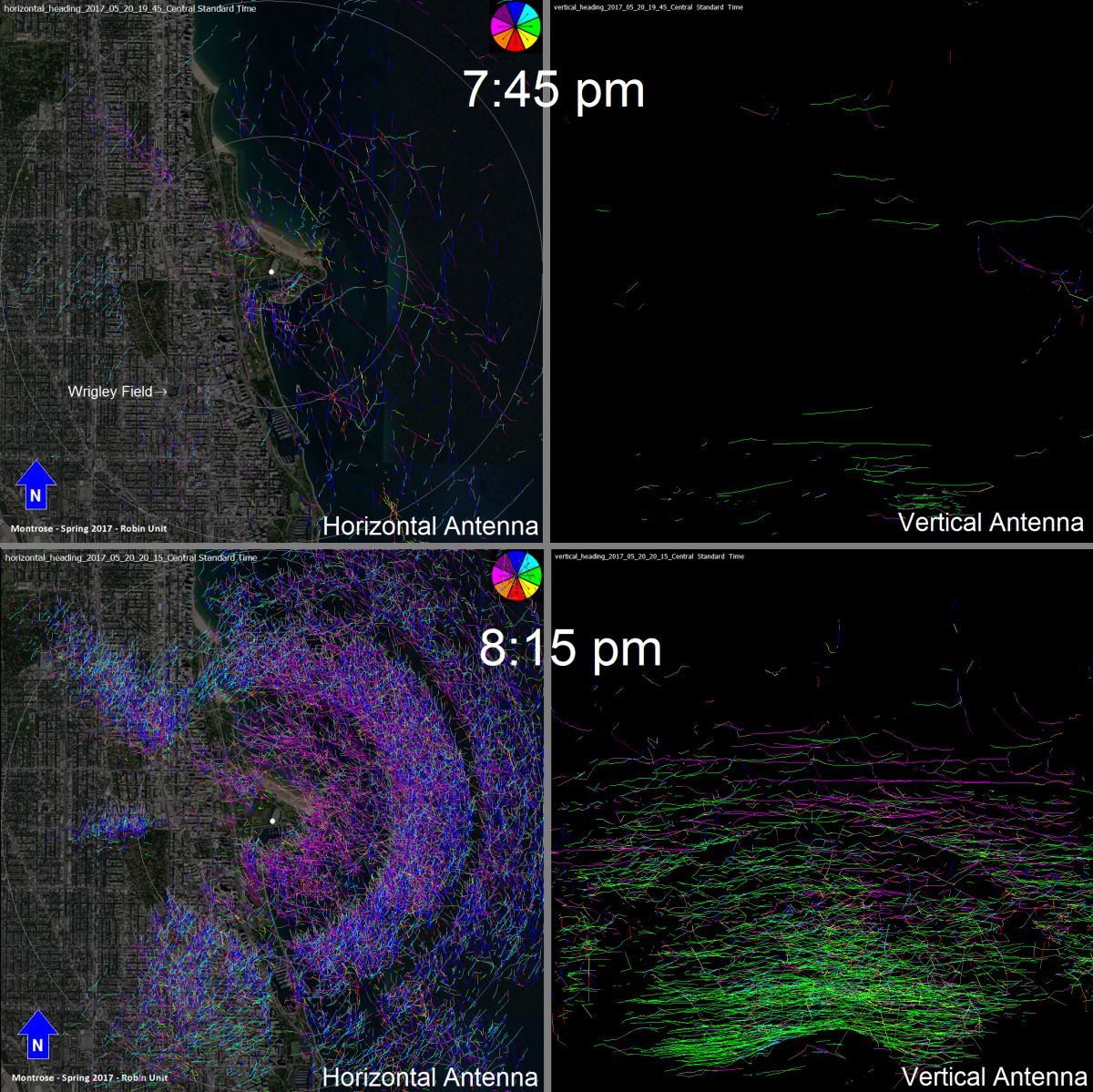 Comparison of horizontal (left) and vertical (right) radar antenna returns just before (top) and just after (bottom) sunset on May 20, 2017, at the Chicago study site (sunset was 8:09 pm). Each image represents targets tracked during a 15-minute sample.  Colors on the horizontal image represent direction of movement—blue for north, green for east, red for south, and pink for west; colors on the vertical antenna image are meaningless. The outer circle on the horizontal image has a radius of 3.7 km; the top of the vertical image is 2.8 km in altitude. Horizontal detection was largely blocked by the Chicago skyline to the west of the radar, while it was largely unobstructed to the east (over the lake).  Although a few gaps allowed some target detection to the west, the absence of tracks does not indicate low migrant activity.