Several National Wildlife Refuges (NWRs) in Alaska have joined in a large-scale collaboration across the Northwest boreal forest to study Lynx (Lynx canadensis) through the peak and crash of the snowshoe hare (Lepus americanus) population cycle. Snowshoe hares make up 30–100% of a lynx diet. Lynx populations follow the snowshoe hare population with a  1- to 2-year time lag.  The lynx and hare population cycles seem to radiate from central Canada such that the peak in central Canada occurs about 2 years prior to the peak in the Yukon Territory and Alaska.  The population in Alaska seems to radiate as well, approximately from the southeast then north and westward.  The nature of this “traveling wave” is the central focus of the proposed interagency study using GPS satellite collars on lynx.

Although lynx in northern Canada and Alaska are thought to be doing well, a total population estimate is difficult to acquire due to the population’s cyclical patterns.  Observations suggest 78–100% of a local lynx population disperse 1 to 2 years after the snowshoe hare population crashes. Mortality due to natural causes increases during snowshoe hare declines, and there are indications that dispersal increases trapping mortality. Observations from some areas suggest trapping could harvest a substantial proportion of the population. Overexploitation has been documented in Canada as well. Understanding how lynx respond to the changing abundance of snowshoe hares may result in better management of lynx populations.

In order to capture the scale of this question, at least seven study sites will be established across the region spanning from the southwestern Yukon Territory in Canada, through interior Alaska, up to the Gates of the Arctic National Park in the Brooks Range. The principal investigator of this research, Dr. Knut Kielland at the University of Alaska Fairbanks, began his research on snowshoe hares in 1998 at the Bonanza Creek Long Term Experimental Research site near Fairbanks. He started collaring lynx in 2008 to more intensively study predation on hare. Collaborators on the project include researchers at Gates of the Arctic National Park,  Telin NWR (Dr. Kielland), Kanuti NWR, Koyukuk/Nowitna/Innoko NWRs, Yukon Flats NWR (with assistance from the Region7 Alaska/National Inventory & Monitoring offices), the FWS Branch of the Yukon Government, and scientists at Trent University and McGill University in Canada. Other groups that have shown interest include the Alaska Department of Fish & Game, the Bureau of Land Management Fairbanks Field Office, and U.S. Army/Colorado State University, Center for Environmental Management Military Lands.

Forty lynx were collared in the 2016–2017 trapping season. The goal is to maintain up to 20 collared lynx at each location for at least  2 years following a snowshoe hare population crash.  At a maximum, 140 lynx could be collared annually and at least 109 of the collared lynx would be expected to disperse during the snowshoe hare population crash based on dispersal percentages from previous studies.  Snowshoe hare numbers are projected to peak in the Yukon Territory during 2017, and numbers are expected to peak across Alaska in the 2 years following,  creating some urgency in the timing of this project in order to conduct the research during this current population cycle.

The project has three research objectives. 1) Examine lynx survival and patterns of dispersal during the increase, peak, and decline of the snowshoe hare population. 2) Determine whether mass dispersal of the lynx population occurs when the snowshoe hare population crashes, and if this movement is random or in a common direction, as proposed by the “traveling wave” hypothesis, and if lynx are using common travel corridors. 3) Investigate the habitat use and activity patterns of lynx within the shifting mosaic of fire-induced changes in the composition and structure of the boreal forest. The project also has three management objectives. 1) Determine if the trapping effect on lynx survival is additive or compensatory, and suggest future management of the lynx population based on these findings. 2) Predict future habitat availability using findings of preferred habitat use and existing climate models. 3) Test existing corridor models that are based on physical environmental factors (e.g., slope and the Normalized Difference Vegetation Index [NDVI]) using a dispersing animal. 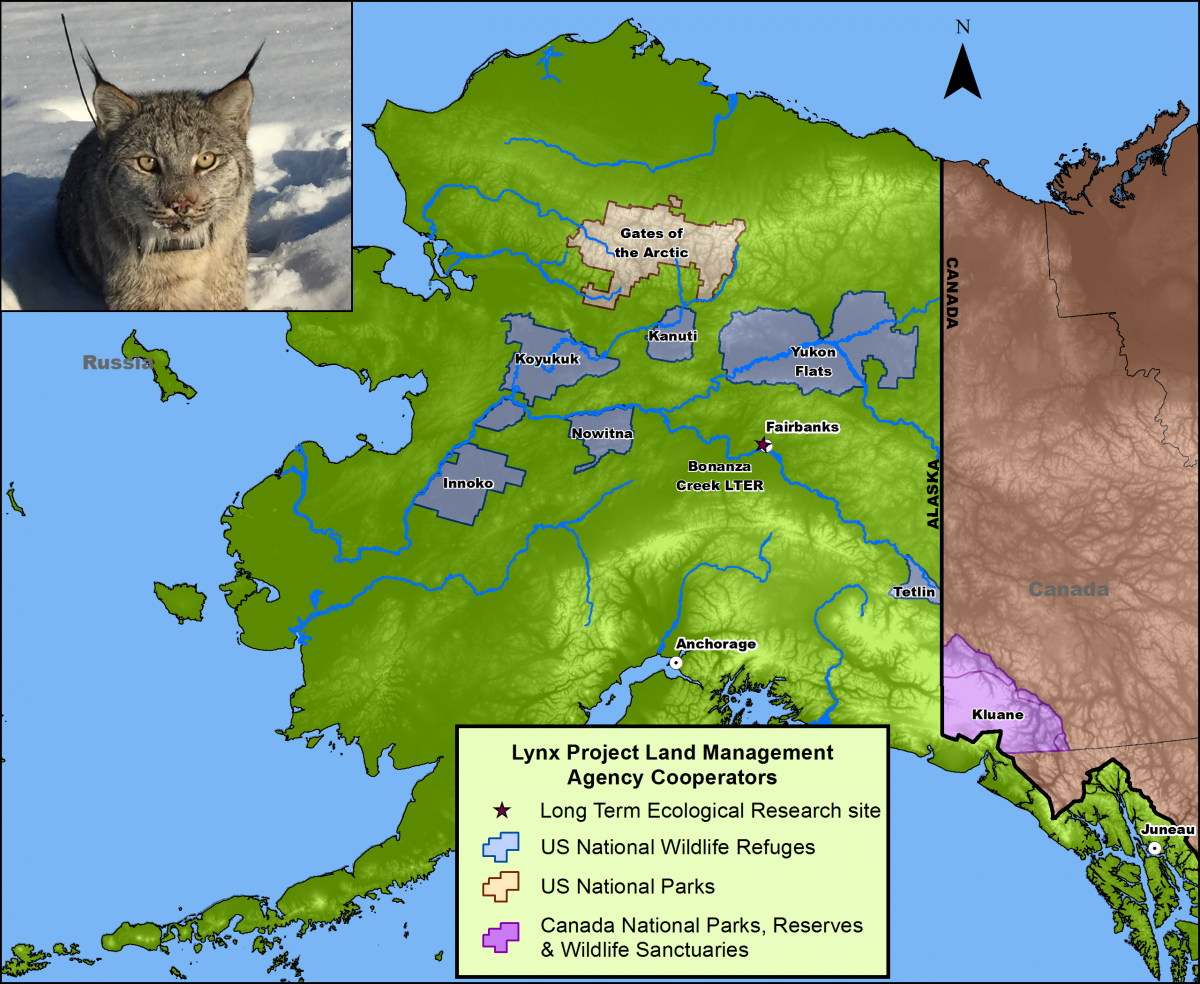