During winter, bald eagles (Haliaeetus leucocephalus) tend to congregate around any open waters within ice-covered rivers and lakes in the upper Midwest in their search for fish.  Open waters can range from a small stream or stormwater outlet a few meters across to many kilometers of open water such as along the Mississippi River.  Ice formation rapidly changes from day to day depending on weather patterns, currents, and thermal inputs from power plants.  Ice can form and thaw in a matter of hours.  Therefore, it is nearly impossible to map ice using coarse resolution, optical weather remote sensing satellites such as Landsat and MODIS.  On February 14, 2017, this changed when Planet.com launched 88 Dove optical remote sensing cube satellites to provide daily RapidEye-5 imagery of the Earth at better than 5-m resolution.

The suite of daily RapidEye-5 snapshots can be used to map and monitor changing water and ice conditions as well as fish and wildlife habitats more easily and systematically -- including detection of open water areas in the wintertime, where researchers and birders can expect to observe bald eagles. A pilot study conducted the last week of 2016 confirmed this application. A RapidEye-5 satellite image from Planet.com permitted detection of open water on Lake Pepin, which is part of the Mississippi River system at the border between Minnesota and Wisconsin. Researchers confirmed the presence of eagles gathered around the open water areas, with the quantity of eagles roughly correlated to the area of open water at a given time. Ice conditions in Lake Pepin vary throughout the winter due to weather, river dam operations by the U.S. Army Corps of Engineers, and from electrical power plants upriver from Lake Pepin.

Like a weather forecast, a daily open water map derived automatically from the remote sensing data would be useful to wildlife managers as well as ice fishermen and bird watchers, with the potential to provide automated near-real-time delivery to mobile devices. 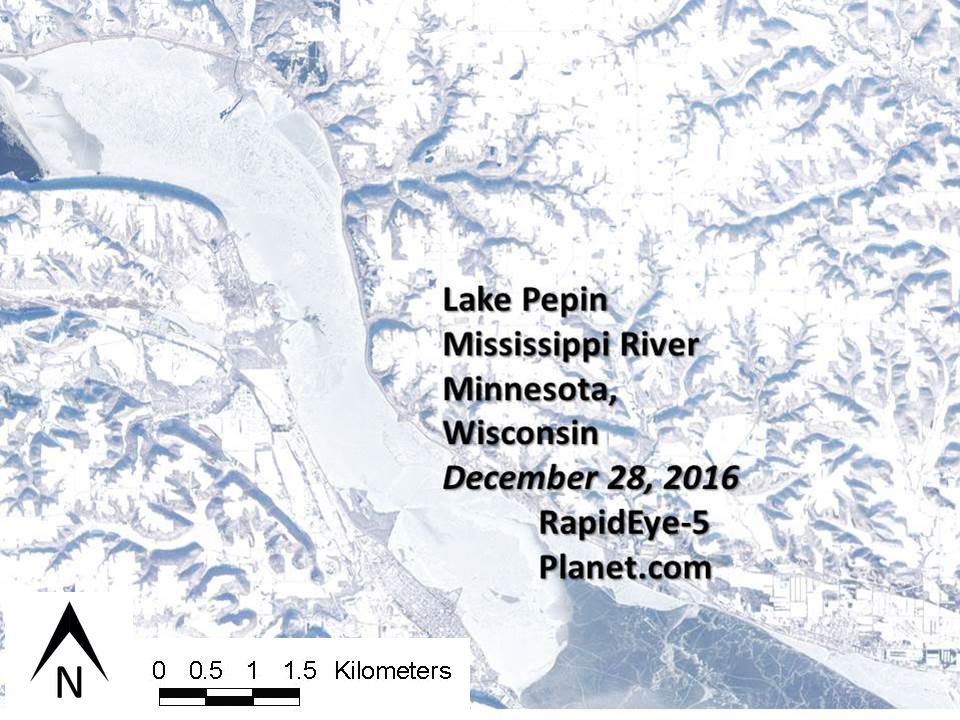 Lake Pepin on December 28, 2016, as captured by the RapidEye-5 satellite courtesy of Planet.com.  Lake City, MN, is visible as the gridded pattern in the lower center of the image.  The manmade channel control dams and river sediments form points jutting into Lake Pepin from the Minnesota (west) side. These structures cause the tailwaters to form eddies below them, which tend to create open waters (dark patches) off the end of the points.  The upper eddy was frozen above Lake City, but a faint pattern of an older open reach can be seen.  The eddy of the point jutting out from Lake City was black ice covered by a thin layer of water.  The size of the open waters varies over time with winter conditions, water flow, and temperature. Images courtesy of Planet.com via the National Geospatial-Intelligence Agency.