Monitoring the dynamic changes of glacial landscapes requires detailed topographic elevation data. In the late summer of 2016, the Kenai National Wildlife Refuge collected 75-cm multispectral imagery on over 4 million acres of the Kenai Peninsula. For the past several years an ecologist at the refuge has been collecting aerial photography and processing the imagery using Structure from Motion software. Structure from Motion (SfM) uses traditional photogrammetry algorithms and texture mapping plus object recognition to produce orthophotographs and three-dimensional (3D) spatial surface data.  About 16 photos overlap every point on the ground, allowing for the creation of a dense and accurate 3D model. SfM can produce low–cost, high-quality geospatial products.

The image sensors comprised two Nikon D810 cameras, one modified to collect near-infrared. A twin-engine Aero Commander (operated by Clearwater Air of Anchorage) equipped with a large camera port and Global Navigation Satellite System (GNSS) antenna was used as the sensor platform. A Trimble R7 was used to record camera positions. Flight lines were flown at 12,000 to 14,000 ft at a speed of about 275 mph. Approximately 12,000 photos each of red/green/blue (RGB) and near-infrared were collected over 5 days. Using Agisoft Photoscan software, spatial products included orthomosaic, point cloud, and digital surface models (DSM). The spatial accuracy was very good, less than 2 m in the XY and 0.8 in the Z axis. When compared with the 2008 lidar, the resulting DSM correlated within the estimated error.

The orthomosaic is currently being segmented for a multiagency land cover classification of the Kenai Peninsula, and the DSM for change detection. The imagery will eventually be available through the USGS (https://earthexplorer.usgs.gov/). The elevation data should soon be available at the Alaska Division of Geological and Geophysical Surveys website (http://maps.dggs.alaska.gov/elevationdata). 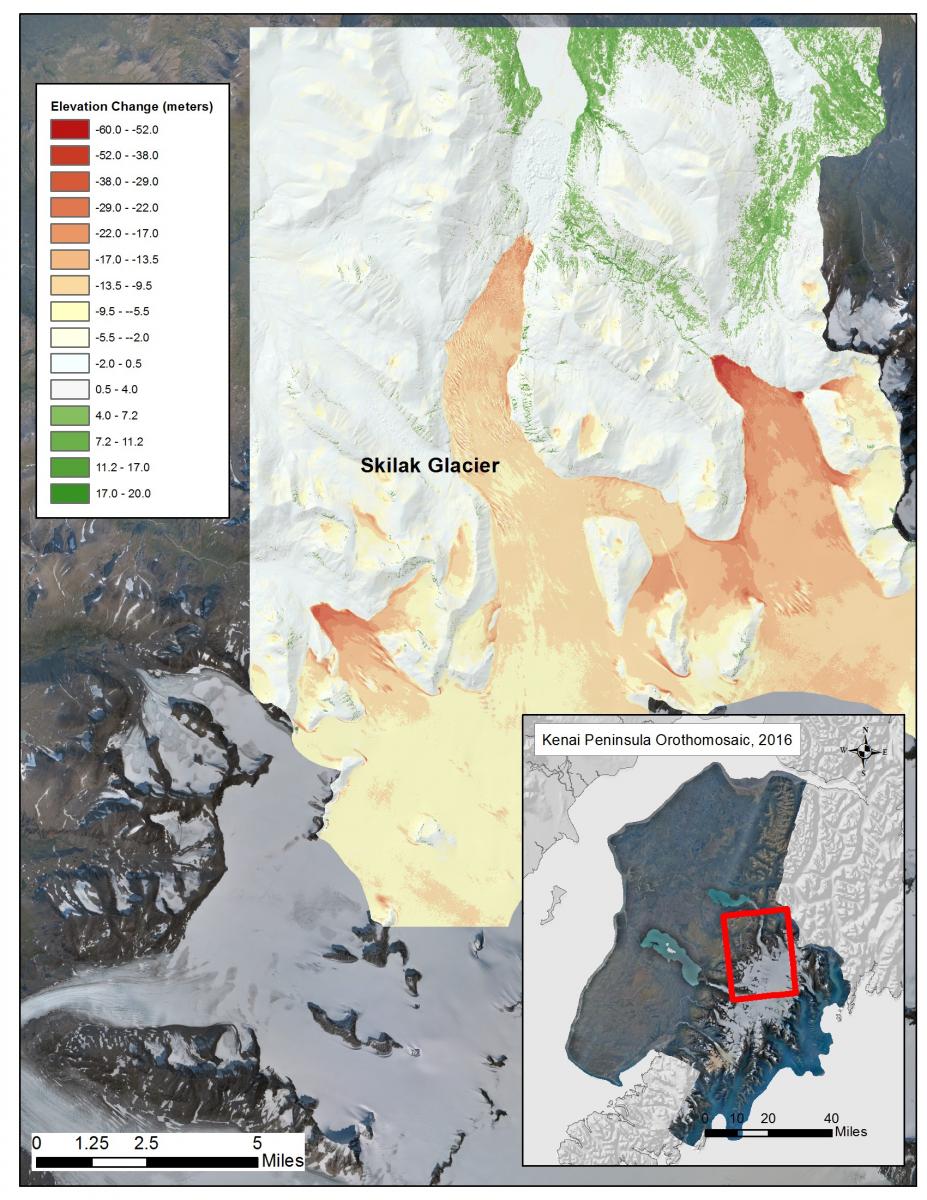 Loss of ice and elevation change (meters) from 2008 lidar to 2016 Structure from Motion DSM. The forested areas show as positive change because the bare-earth lidar layer was subtracted from the SfM surface layer containing tree heights.