On the Kenai National Wildlife Refuge near Headquarters Lake is a small colony of Aleutian terns that nest alongside Arctic terns.  Aleutian terns breed in small colonies along the Alaskan coast and in the Russian Far East. Unlike the Arctic tern and other more abundant seabirds, very little is known about the Aleutian tern. Recent analysis of historical survey data has shown a 93% decline of the Aleutian tern since 1960. Typically, bird colonies are surveyed by researchers on the ground, but this method can have dire consequences for Aleutian terns: if threatened, they will not defend their nest, but abandon it. As a result, FWS researchers explored the use of Unmanned Aerial System (UAS) for collecting population survey data. Two main questions needed to be answered concerning use of UAS.  (1) How high could a UAS be flown and still discern an Aleutian tern from an Arctic tern? (2) Would the presence of a UAS at required altitudes disturb nesting Aleutian terns?

To determine disturbance, an observer hid in a nearby blind watching the nesting terns as the UAS flew over. All flights were flown with a 3DR Solo and Ricoh GR 2 camera. Initial flights started at a maximum altitude of 200 ft above ground level (AGL). Over the course of about two weeks, 21 flights were flown ranging from 200 to 50 ft AGL. The observer detected no disturbance to the nesting tern; no tern flushed from its nest due to the presence of a UAS overhead. While terns were actively driving off seagulls, a couple of individuals were observed diving close to the UAS; however, when seagulls were not in the area, flying terns did not approach the aircraft.

To determine optimal flying height, the UAS-obtained photos were mosaicked using Agisoft Photoscan and examined. Terns were easily identifiable at 100 ft AGL. To discern between Arctic and Aleutian terns, a resolution of about 0.5 cm is needed. This resolution requires an AGL of about 60 ft and a speed of 7 mph. The terns will be surveyed again in 2018 to further improve the technique. 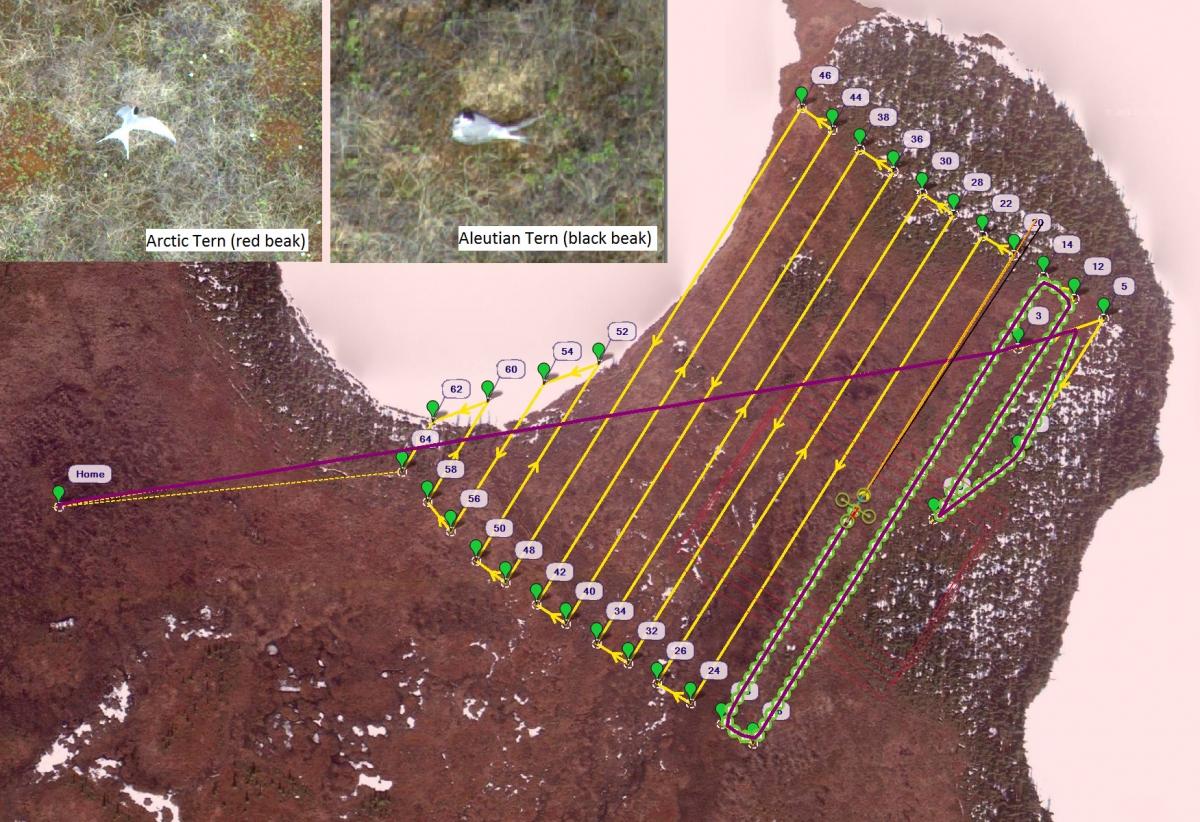 UAS mission plan for Aleutian tern survey and tern photos taken from an altitude of 60 ft.