Barrier islands are dynamic environments due to their position at the land-sea interface. Storms, waves, tides, currents, and relative sea-level rise are powerful forces that shape barrier island geomorphology and habitats (for example, beach, dune, marsh, and forest). Hurricane Katrina in 2005 and the Deepwater Horizon oil spill in 2010 are two major events that have impacted habitats and natural resources on Dauphin Island, Alabama. The latter event prompted a collaborative project funded by the National Fish and Wildlife Federation that involves efforts by the State of Alabama, the USGS, and the U.S. Army Corps of Engineers to evaluate the feasibility of various restoration alternatives and how specific alternatives might increase the resiliency and sustainability of Dauphin Island (http://www.nfwf.org/gulf/Documents/al-dauphin-assessment-14.pdf).

In order to understand the feasibility and sustainability of various restoration scenarios, it is important to understand current conditions on Dauphin Island. To accomplish this, researchers at the USGS Wetland and Aquatic Research Center produced a detailed map of barrier island habitats on Dauphin Island by using object-based image analyses trained with a suite of environmental variables. These include, tide data, topography, surface elevation, 1-ft aerial imagery, road data, salinity data, and lidar data that incorporated elevation uncertainty with a Monte Carlo simulation to estimate probability surfaces for intertidal areas and areas above extreme storm water levels. As part of this effort, USGS scientists also conducted a survey of land cover types, vegetation community, and elevations from mid-November 2015 to mid-December 2015 along randomly placed transects at seven sites throughout the eastern half of the island. These products provide baseline data regarding the ecological and general geomorphological attributes of the area, which can be compared with observations from other dates for tracking changes over time. https://pubs.er.usgs.gov/publication/ofr20171083 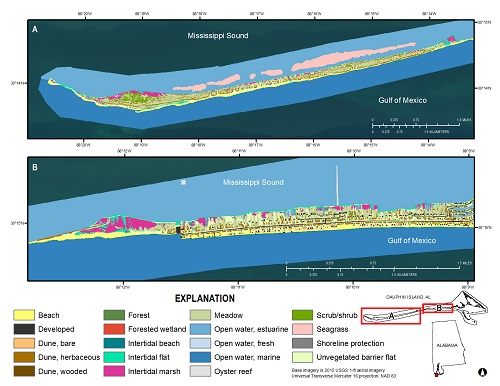 Habitat map for the western two-thirds of Dauphin Island, AL, 2015.