LANDFIRE, the Landscape Fire and Resource Management Planning Tools Program, is a vegetation, fire, and fuel characteristic mapping program managed by the U.S. Department of Agriculture Forest Service and the U.S. Department of the Interior, in partnership with The Nature Conservancy. The original LANDFIRE National product suite consisted of base layers mapped circa 2001. The data have since been updated (i.e., LandFire (LF) 2008, 2010, 2012, and 2014) using Landsat imagery; however, improvements in image compositing and tiling algorithms, plus faster, lower cost computing hardware, are enabling many more Landsat images to be utilized in an upcoming LANDFIRE Remap effort to generate a new set of base map products.

LANDFIRE 2015 Remap is not limited to utilizing the production techniques of the original LF National and subsequent update production processes. Instead, it provides an opportunity to use newly available datasets, such as Landsat 8 and airborne lidar, and data processing techniques to produce new vegetation, fuels, and fire regime base layers that are representative of circa 2015 ground conditions.

In preparation for the Remap effort, LANDFIRE asked users what they were looking for in the new base map products and users provided significant input. In response to user feedback, LANDFIRE Remap prototyping efforts have focused on the following:

Additionally, LANDFIRE is adding a new Existing Vegetation Type dataset based on the National Vegetation Classification System to the suite of products.  LANDFIRE Remap production commenced in mid-2017 and is expected to take 2–4 years to complete. 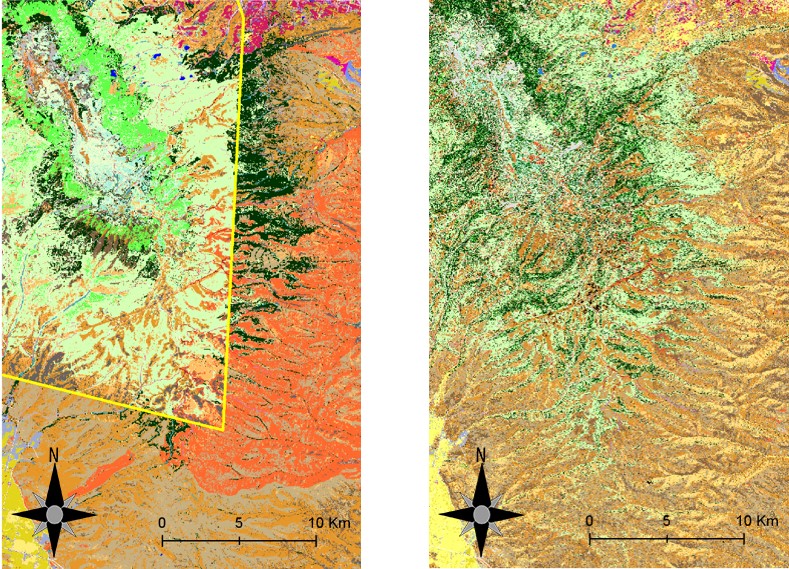 LANDFIRE Remap is improving the seamline issues to avoid hard edges that are apparent in earlier versions of the products. The example above shows seamline issues in the Existing Vegetation Cover product from LF 2014 (left) and no issues in LF 2015 Remap (right).