Susceptibility of slopes to landslides at high latitudes have increased due to degradation of permafrost in rock and soil, debuttressing of slopes resulting from glacial retreat, and changes in ocean ice cover. In the United States, the most severe impacts on slope stability are expected to occur in Alaska. Recently, several large rock avalanches in Glacier Bay National Park (GBNP) have drawn attention to the size and rate of these events. However, the lack of historical data makes it difficult to compare the magnitude and frequency of current events with past activity.

Landsat imagery (30-m resolution) was used to map and examine changes in the frequency, magnitude, and mobility of rock avalanches in GBNP between 1984 and 2016. Landsat’s shortwave infrared bands (Band 5 on Landsats 5 and 7; Band 6 on Landsat 8), which penetrate thin clouds and discriminate changes in ground moisture content,  were found to most effectively differentiate between rock avalanche deposits and the surrounding glaciated terrain. In addition to the use of single band images, multi-band false-color images were used to accentuate differences between snow or ice and rock avalanche debris. Band combinations 453 (Landsat 5/7) and 564 (Landsat 8) were found to be most effective for mapping in this region. A 5-m resolution Digital Elevation Model (DEM) was used in conjunction with Landsat imagery to determine the total area covered by each rock avalanche, the maximum travel distance measured along a curvilinear centerline (L), and the maximum change in elevation between the start and end points of the centerline (H). 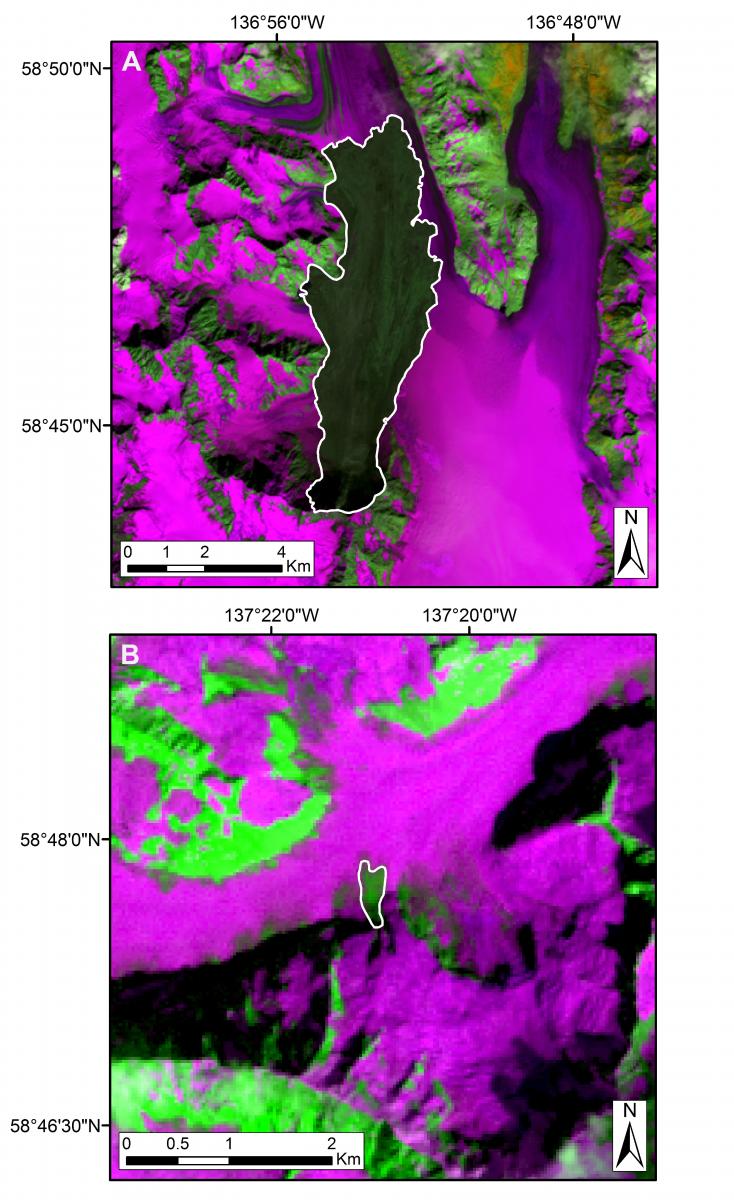 False-color composite Landsat images showing the (A) largest and (B) smallest mapped rock avalanches (outlined in white) in Glacier Bay National Park, Alaska, between 1984 and 2016.