In summer 2017, the BLM National Operations Center (NOC) participated in a BLM Washington, D.C., Office pilot program to use imagery from unmanned aircraft systems (UAS) to characterize important cultural, archaeological, and paleontological sites on BLM land.  As part of this program, the BLM NOC spent a week in June 2017 at the Farmington Field Office (FFO), Farmington, New Mexico, which has responsibility for three United Nations Educational, Scientific and Cultural Organization (UNESCO) World Heritage sites associated with the Chaco Culture World Heritage Site.  The goal of the pilot project was to collect high-resolution UAS stereo imagery of these World Heritage sites and develop methods for interpreting, documenting and monitoring the contained artifacts. These three UNESCO World Heritage sites are the only three such sites on BLM land. Originally constructed and occupied about 1,000 years ago, these three sites are in varying states of decay. One site, Twin Angels, risks major threats due to erosion from weathering and routine visitation.

Twin Angels, an outlier of the Chaco Canyon, is located along the Great North Road leading to the Chaco Canyon about 33 miles to the south.  Twin Angels contains various remains of great houses (parts of which have been excavated) that sit on a narrow ridge, with 30- to 90-foot vertical walls jutting into the Kutz wash.  The ridge was completely imaged utilizing the 3DR Solo UAS by combining both nadir flight lines and low-level orbital flights with an oblique facing camera to capture the ridge, its vertical walls, and the surrounding area.  The collected imagery as well as surveyed ground control targets placed within the site were processed using a rigorous photogrammetric (structure-from-motion) workflow to produce a dense point cloud and 3D model of the site. These data enable the FFO to establish a baseline of the site’s current condition and then recapture the site with a UAS in a similar fashion to monitor future erosion and general degradation of the site. 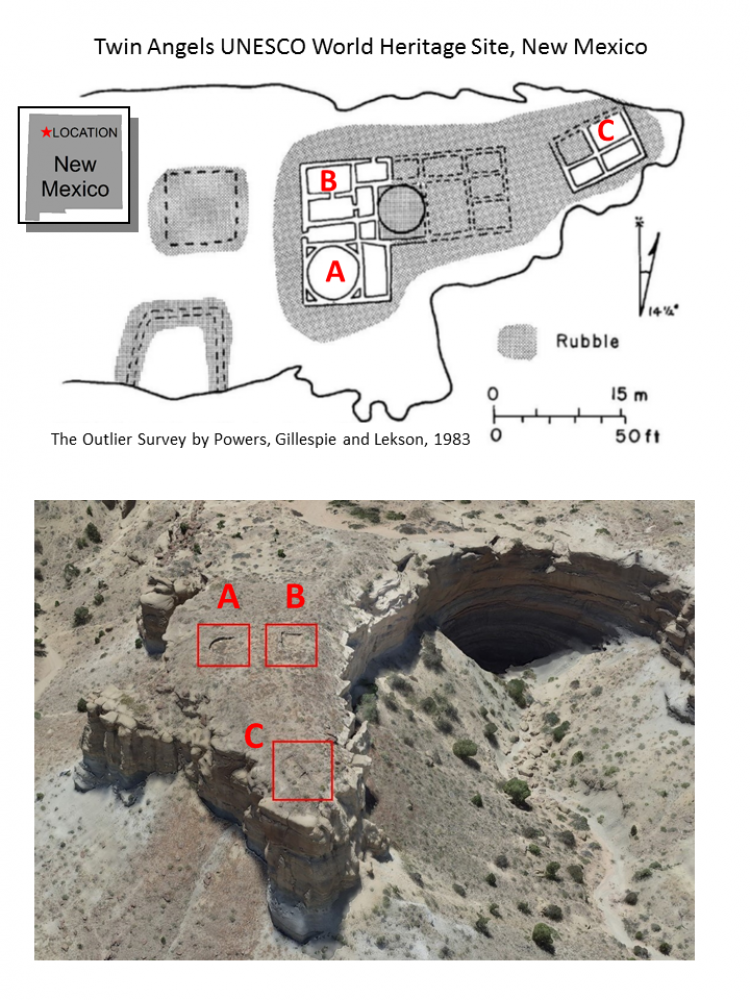 A site map from 1983 of Twin Angels (top), a UNESCO World Heritage Site part of the Chaco Culture shows the location of excavated great houses (A,B,C) located on the ridge.  A high-resolution 3D model (bottom) was created by collecting nadir and orbital-oblique stereo imagery with a UAS platform.  The georeferenced 3D model provides the location of the excavated great houses (A,B,C) as well as the morphology of the entire ridge to better inventory and monitor the site. (Map from Powers, Gillespie, and Lekson, 1983)