In the United States, there are currently over 100,000 miles of canal and levee embankments on the national inventory list, most of which are 50 or more years old and have surpassed their initial design life.  These aging water conveyance systems are known to lose large quantities of water due to distributed seepage, resulting in major costs of operations and maintenance, and economic losses to stakeholders.  However, the locations and quantities of distributed seepage are generally poorly understood. As a result, there is a need for technologies that can provide detailed yet comprehensive seepage mapping and quantification on a system-wide or even regional basis.

To address these challenges, researchers at the BOR are working with the Lahontan Basin Area Office (Truckee Canal) and researchers at the National Aeronautics and Space Administration (NASA) Jet Propulsion Laboratory (JPL) to develop new satellite-based remote sensing approaches for detecting and quantifying canal seepage.  A novel approach currently being evaluated for proof-of-concept involves the use of time-lapse analysis of satellite-based Synthetic Aperture Radar (SAR) data, combined with operations and other ground-truthing data.  Interferometric analysis of SAR data (InSAR) has most commonly been used to identify changes in Earth’s surface topography (such as pre/post-earthquake, landslide, and subsidence).  However, recent research has indicated that near-surface water saturation also has a measurable influence on SAR data.  This new application of SAR could enable high-resolution and long-term monitoring and quantification of seepage losses along entire canal systems.

The BOR research team has acquired limited seed funding through Reclamation’s Science and Technology Program and from NASA Research Opportunities in Space and Earth Sciences (ROSES) 2018: Land Cover Land Use Change, and has submitted requests for additional fiscal year 2019  funding to help support further testing and development of this technology. 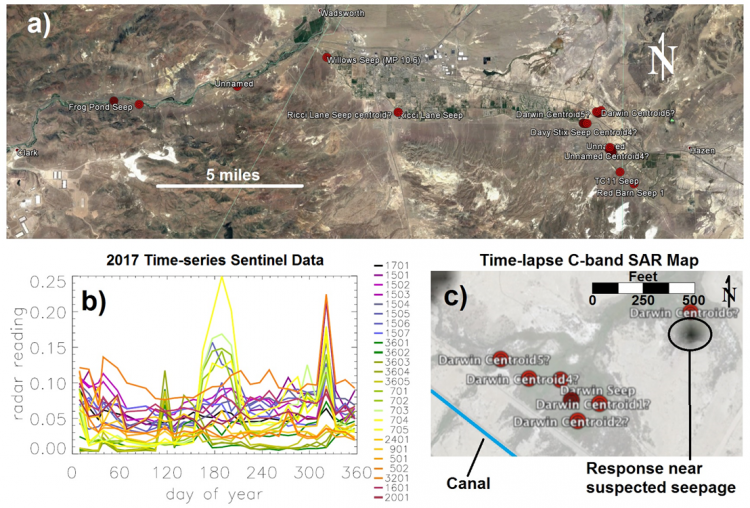