The BOR operates the Paradox Valley Unit (PVU), a salinity control project located at Paradox Valley in western Colorado that helps to minimize water degradation in the Colorado River. PVU diverts up to 90% of the naturally occurring brine groundwater in Paradox Valley, preventing it from entering the Dolores River. The subsurface brine is intercepted by PVU and then pumped into a 4.8-kilometer-deep injection well at the edge of the valley. Thus, the state of the reservoir and integrity of the PVU brine injection operations are of utmost importance to BOR. BOR monitors the injection operations and accompanying induced seismic events, thousands of which were detected since continuous injection began in 1996. Considering the amount of brine and the recorded induced seismicity, subsurface deformation was suspected and may be detectable through corresponding surface uplift or subsidence. However, because no surface measurements utilizing tilt meters or global positioning system (GPS) have been undertaken for Paradox Valley, BOR researchers evaluated the use of interferometric synthetic aperture radar (InSAR) for the Paradox Valley region.

SAR interferometry measures the change in distance between the radar and the ground in the period of time spanned by two SAR scenes. Thus, InSAR contains information on topography as well as change in topography that may have occurred between the data acquisition dates. Surface deformation that reflects motion away and/or toward the satellite causes an increase and/or decrease, respectively, in the signal path length. For the analysis of the Paradox Valley Unit, available SAR data were compiled from University NAVstar Consortium (UNAVCO) and Alaska Satellite Facility (ASF) archives. Datasets from the European Remote-Sensing satellites (ERS1, ERS2), Advanced Land Observing Satellite (ALOS-1), and Environmental Satellite (ENVISAT) produced some interferograms with the best coherence among the available SAR imageries. InSAR processing produced indications of extensive deformation along slopes, valleys, rivers, and peaks surrounding and adjacent to Paradox Valley. Results indicate possible ground movement that ranges from 2-10 centimeters of deformation within several weeks to several years, which most likely correlates to soil expansion/contraction caused by weather and seasonal variability in the region. There was no indication of any deformation, either uplift or subsidence, that can be related to PVU well-injection operations on the analyzed interferograms in this initial study. 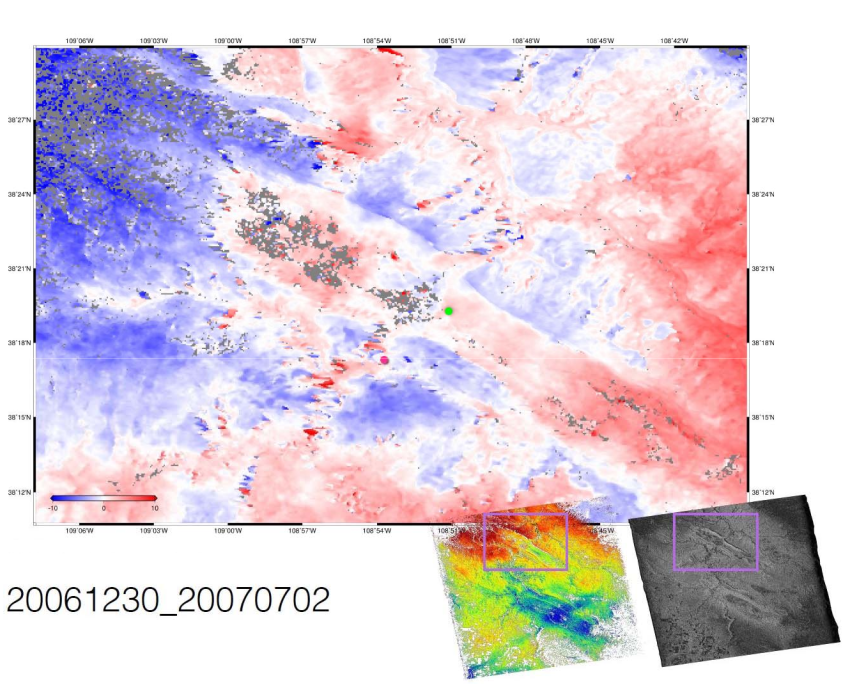 An example of a LOS displacement map (a) with good coherence produced for Paradox Valley Unit (star) for ALOS-1 t27105_f750 scenes and interferogram (b) with 2808m baseline length between master and slave scenes taken on 2006-12-30 and 2007-0702, respectively. Right inset in (a) shown as white pixels correspond to high coherence and grey/black pixels indicates low or no correlation. The area in the insets and (b) enclosed by a rectangle (55km x 40km) is the Paradox Valley region.