BOR dams and reservoirs like Colorado’s Vega and Green Mountain, and Wyoming's Seminoe have landslide and/or dam issues that require long-term monitoring. In this research, the use of interferometric synthetic aperture radar (InSAR) is being investigated as a monitoring tool for landslide and dam  structure-related deformation. InSAR compares two SAR scenes and measures slight changes in topography that occurred between the two acquisition dates. Generally, damage from slope failures or landslides is not as costly or as spectacular as catastrophes like earthquakes, hurricanes, or major floods. However, since slope failures are usually widespread, they can cause massive property loss and casualties over the years. In Vega and Green Mountain reservoirs, landslides pose continuing and serious impact on the dam and its reservoir that can be triggered by the combination of several factors: steep slopes, jointed or weak formation, the presence of abundant water, freezing and thawing temperatures, and in some cases enhanced by sudden ground shaking from earthquakes. SAR data collected from University NAVstar Consortium (UNAVCO) and from the Alaska Satellite Facility (ASF) and were composed of data from European Remote-Sensing satellites (ERS1, ERS2), Advanced Land Observing Satellite (ALOS-1), and Environmental Satellite (ENVISAT) sensors and processed using the open-source software, GMTSAR.

At Vega dam, interferograms for several months were produced using ALOS-1 data that showed good coherence. These InSAR data indicated apparent ground movement that ranges from 5 centimeters (cm) to 20 cm deformation of about 1-year duration. The areas with InSAR-detected deformation correspond to the locations of recognized landslides from another study, and from satellite images (U.S. Geological Survey, National Aeronautics and Space Administration, and Digital Globe) as displayed on Google Earth. Using these results, sites for further and/or possible future monitoring for Vega were identified. At Green Mountain dam, corner reflectors were installed on several landslide surfaces to investigate if they could be detected in InSAR data for long-term deformation monitoring. Unfortunately, initial processing indicated that the Heeney landslide is located on or near the edge of the ALOS-1 and ALOS-2 SAR coverage. Thus, current InSAR data are not useable and redesign of corner reflector installation is underway. For Seminoe Dam, the Sentinel SAR data resolution is not detailed enough to resolve deformation on the concrete dam. Given the amount of expected deformation and the orientation of the dam, ground-based SAR and/or dual-frequency global positioning system (GPS) measurements will be examined during fiscal year 2019 research. 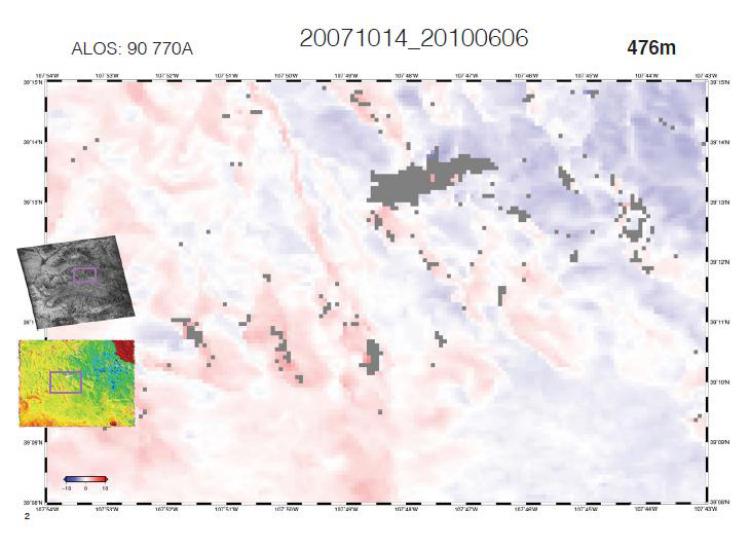 Plots are line of sight (LOS) in centimeters between the master and slave images where blue (away) and red (toward) displacements of the ground relative to the satellite. The left header indicates the satellite with track (t) and frame (f) numbers in ascending (A) direction, and the upper right number is the baseline length. The main header number pair is the date when the master and slave images were taken. The upper left inset is the plot of corresponding coherence where white pixels indicated high coherence and grey/black pixels correspond to low or no correlation. The lower left inset shows unwrapped fringes in radians while the area enclosed in the rectangle is the Vega dam area; the small purple rectangle is 55 kilometers x 45 kilometers.