The recent infestation of an Asian scale insect was blamed for a widespread phragmites (marsh grass) dieback in southeast Louisiana that alarmed resource managers. The stakes are high; although phragmites is invasive, it is the lynchpin of many Southeast coastal marshes due to its dense, strong roots, which retain wetland soils and mitigate erosion. Its loss threatens the ecological and economic functions of coastal wetlands, including the Mississippi River delta.

The field-observed 2017 phragmites dieback was considered an isolated event until a recent USGS study showed that phragmites marsh actually began declining in 2015, more than a year before the 2017 dieback and scale infestation were discovered. A partial recovery through 2016 was followed by the spring 2017 alarm. Scientists working on a solution to the scale infestation have said the new USGS analysis boosts their understanding of the problem and provides a path forward to determine what is happening in these marshes.

As part of the USGS Environmental Management Agency (EMA) Invasive Species competitive Request for Proposals (RFP), follow-on work was funded to increase the understanding of the causes of phragmites dieback. The follow-on study will extend the original 3-year study into the past and future and will transfer the remote sensing mapping capabilities to the U.S. Fish and Wildlife Service (USFWS). Extension into the future will provide a cost-effective operational mapping system for detecting subtle signs of phragmites change in order for managers to effectively mitigate and finally eradicate Asian scale. The follow-on study begins in October 2018. 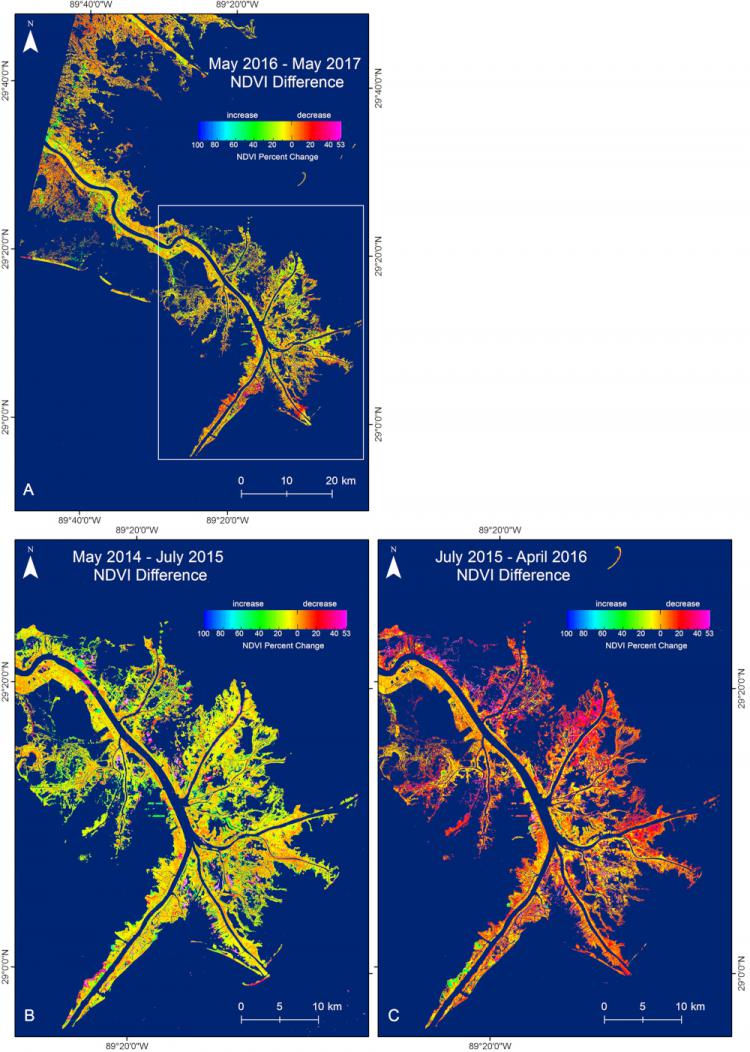 (A) Mississippi River delta overview of change in phragmites marsh greenness (NDVI) from May 2016 to May 2017. Colors indexed in the legend represent the percent increase or decrease of NDVI from the earlier to the more recent date. The box encompasses the USFWS Delta National Refuge area-of-interest depicting NDVI change from (B) May 2014 to July 2015 and (C) July 2015 to April 2016.