The 2018 eruption of the Kīlauea volcano in the Hawaiian islands is historically unprecedented in many ways, with explosions and repetitive large-scale collapse events at the volcano’s summit and voluminous lava output in the Lower East Rift Zone (LERZ) that has strongly impacted communities in the lower district of Puna. Additionally, it marks the Federal Government’s first UAS response to a volcanic eruption. The success of the UAS response relied on rapid and safe integration of UAS operations into temporary flight restriction areas, which required close operational coordination with the Federal Aviation Administration, emergency managers, land owners, and local operators. Once effective airspace coordination was achieved, researchers were able to provide a stream of quick-turnaround data products to scientists for quantitative use, and to emergency managers for situational awareness. Integrating new gas sensors permitted volcanic gas emission measurements from inaccessible or hazardous areas, and live video streaming to emergency operations centers in Hilo and Honolulu supported management of emergent public safety situations.

An assortment of rotor and fixed-wing UAS and sensors were used to monitor the eruption at both the summit and LERZ. UAS were equipped with gas sensors to monitor emission rates and concentrations, and visual and thermal cameras were used to provide videos for situational awareness. Repeat nadir videos were captured over sections of the lava channel to support eruption rate estimates, and photogrammetry surveys were conducted to create very high-resolution digital elevation models (DEMs) and orthophotos. These data were used to monitor flow advance rates and erupted volume and provided updated topography for flow inundation modeling in the LERZ. A time series of DEMs of the summit captured caldera growth, including rate and volume of collapse, and orthophotos were used to map out fractures and ballistic fall fields. The remarkable datasets derived from these UAS surveys provided unprecedented monitoring data and truly show the utility of UAS for volcano monitoring. 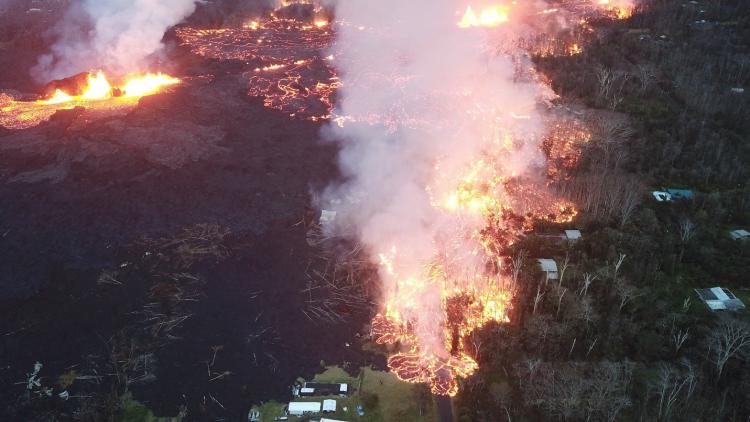 Image taken by UAS of a fast-moving pahoehoe lava flow outbreak into a residential area in the Lower East Rift Zone. The USGS-DOI team worked with first responders on the ground to rescue a resident trapped by this lava flow. 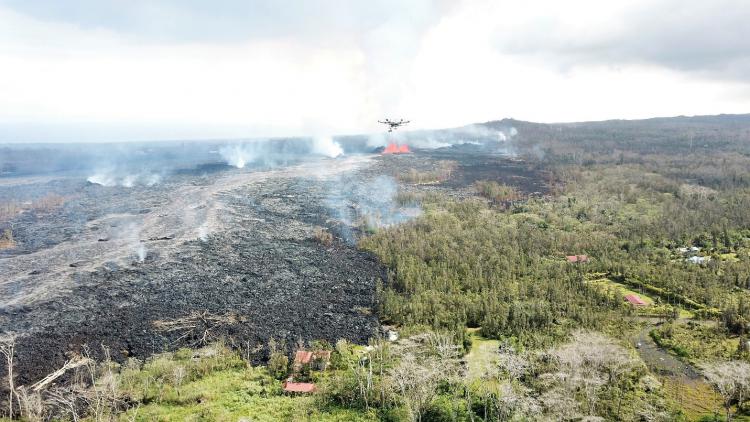