During the spring of 2014, about 105,000 acre-feet (130 million cubic meters) of water were released from the Morelos Dam in the United States into the lower Colorado River into Mexico, allowing water to reach the Colorado River Delta and Gulf of California for the first time in 13 years.  USGS researchers used remote sensing to assess the effects of this historic binational experiment (the Minute 319 agreement of a water treaty between the United States [U.S.] and Mexico) that allowed this ecologically meaningful flow of water from one nation to another. Spatial applications for water resource evaluation are important for binational, integrated water resources management and planning for the Colorado River, which traverses seven states in the U.S. and two states in Mexico. Vegetative response along the riparian corridor was examined using two sources of satellite-based data: 250-meter (m) Moderate Resolution Imaging Spectroradiometer (MODIS) and 30-m Landsat 8. These data were used to track evapotranspiration (the combined loss of water through soil evaporation and plant transpiration; ET), and to create an index to estimate the amount of photosynthetically active vegetation (the normalized difference vegetation index; NDVI).

USGS results showed an overall increase in NDVI (higher vegetation greenness) and ET (more water loss) in the year following the 2014 pulse. The higher NDVI and ET indicate that there was enough water in the riparian zone to generate a positive response from plants, reversing a decline in NDVI and ET since the last major flood in 2000.  NDVI and ET levels decreased in 2015, but were still higher than pre-pulse (2013) levels. Preliminary findings show that the decline in 2015 persisted into 2016 and 2017. Analysis is ongoing to compare results for 2018 onward to short-term (2013-2018) and long-term (2000-2018) trends. Current results support the conclusion that these environmental flows from the U.S. to Mexico via the Minute 319 “pulse” had a positive, but short-lived (one year), impact on vegetation growth in the delta. 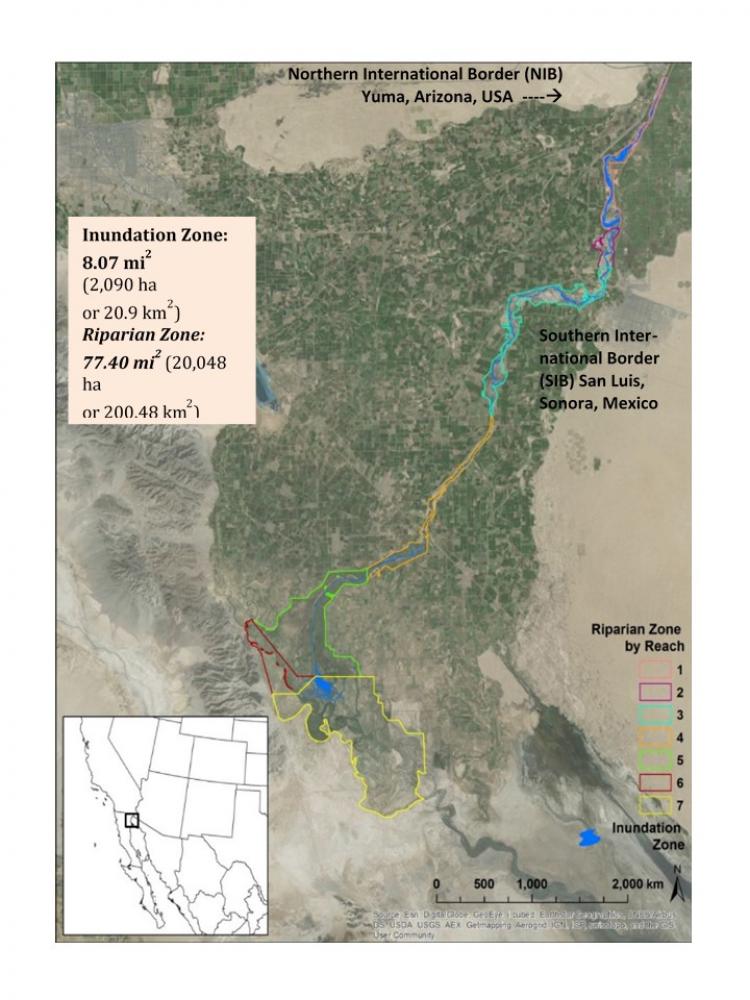 Map of the Colorado River Delta showing the seven reaches of the riparian corridor and the inundation zone (the wetted zone). The inundated area tracked the flow from the spring 2014 release of water from Morelos Dam on the U.S.-Mexico border, which flowed from the Northern International Border (NIB) past the Southern International Border (SIB) and throughout the delta to the estuary in the Gulf of California.