During 2019, the Avian Radar Project surveyed the migration of birds and bats in the Detroit, Michigan, area using mobile avian radar units. Sites located on Lake St. Clair and western Lake Erie assessed how migrants moved when approaching and leaving urban areas. The mobile avian radar units can track thousands of individual birds or bats simultaneously within about a 3-mile range and does so passively with no need for tagging the animals.

Migration was strong throughout the month of September and included sporadic movements through the beginning of November. These timeframes are in line with what has been observed around the rest of the Great Lakes. Interestingly, many effects witnessed on the main Great Lakes were also observed on Lake St. Clair, including dawn movement toward shore where migrants come in off the water to look for safety amongst the shoreline habitat. In addition to the radar units, researchers deployed ultrasonic microphones near the radar sites and on the Detroit River National Wildlife Refuge property to sample bat activity. These monitors allow researchers to hone-in on bat activity itself, as well as track the activity levels of the different bat species.

Data gathered this season will be combined with that from prior years to produce a regional map of migration for the Great Lakes. This map will highlight high usage areas and help land managers prioritize conservation efforts on areas with the highest importance to migrating birds and bats. Once this map has been developed, it will be combined with data from other sources, including acoustic monitors, to develop a Decision Support Tool that can be used directly by land managers, planners, and policy makers. This tool and the raw data from this and other seasons of the project will be served on the project’s website: https://www.fws.gov/radar/. 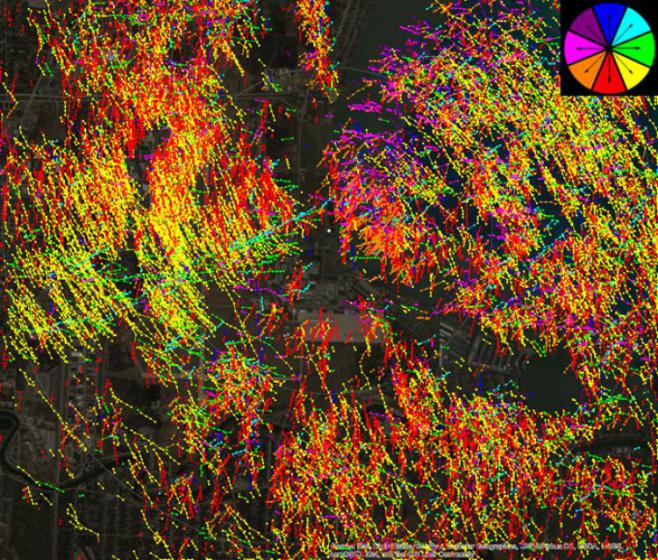 One hour of migration activity near Lake St. Clair. Each line represents one bird or bat that was tracked, and they are colored by their direction of movement.