Fires rage through hundreds of thousands to millions of acres in sagebrush ecosystems every year in the western U.S. The number of acres burned today is substantially more than has burned during previous decades. These sagebrush fires not only alter the carbon balance and potentially degrade land and waterways, but also endanger humans and their homes, wildlife and their habitat (including threatened and endangered species), energy development infrastructure and grazing lands. Invasive cheatgrass is a main culprit in sagebrush fires because it creates highly flammable fuel beds that effectively spread fire. Cheatgrass is the primary annual herbaceous species in sagebrush ecosystems, and its abundance is highly variable year-to-year. Without yearly maps of annual herbaceous cover, it is impossible to know where and how much cheatgrass exists over broad geographical areas. If accurate annual herbaceous cover maps are available prior to fire-season planning activities, they can be useful as planning tools.

To meet this need, scientists at the USGS Earth Resources Observation and Science (EROS) Center developed and publicly released two datasets in 2019 that provided estimates of annual herbaceous cover, one in May and a second in early July. The data are modeled using remotely sensed and geophysical data integrated into machine-learning software. Mapping software converts the model outputs into spatially explicit maps of annual herbaceous cover that provide pixel-by-pixel values and overall average and standard deviation values. The maps developed by this project can be used by other ecological modelers as predictor variables in their models and by land managers as they work to understand the yearly dynamics of annual herbaceous cover, habitat conservation, and control of invasives to mitigate cheatgrass-caused fire events. 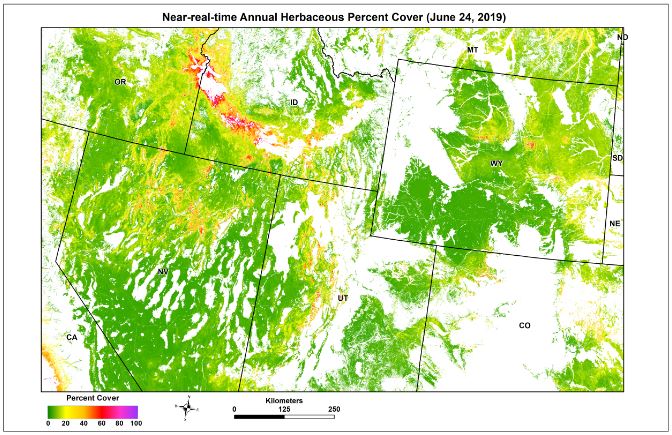