When nightly migration starts or ends, birds transition vertically through the airspace where there is the potential for collision with anthropogenic structures. Factors that increase collision risks include reduced visibility because of bad weather, size or orientation of the object (such as powerlines), time spent in the collision zone, and proximity to large concentrations of birds or important habitat areas. The forested wetlands along the southwestern shore of Lake Erie support important concentrations of nocturnal migrant songbirds during spring and fall migration. Inland woodlots are also important to migrant birds in this largely agricultural landscape.

Researchers estimated rates of ascent and descent of (presumed) birds between 40 meters and 200 meters above ground level during spring and fall migration. Data were collected in the spring and fall of 2015 and 2016, using an x-band marine radar with a vertically rotating open array antenna. The median rate of ascent in spring was 2.2 meters/second, and in fall was 3.2 meters/second. Descent rates were similar in the spring and fall (4.0–5.0 m/s). Using spring ascent rates that fell between 47.5% and 62.5% quantiles (25% of all observations) around the median and an estimated songbird flight speed of 11 meters/second from the literature, the team estimated that birds departing a 20-meter tree would travel 500–1,000 meters horizontally before reaching an altitude of 120 meters — the height of a 1.5-megawatt wind turbine. As an exercise to demonstrate the places where turbines might be placed more safely in this landscape, Gap Landfire National Land Cover Database data were used to buffer 250, 500 and 1,000 meters around wooded and shrub areas. While the landscape looks wide open, these buffers revealed that most of the landscape may not be far enough from wooded areas to reduce the risk of collision for nocturnal migrant birds that stopover in these wooded areas. Understanding horizontal distance for ascent and descent, along with habitat quality and usage, may assist in siting structures such as wind turbines and transmission lines. 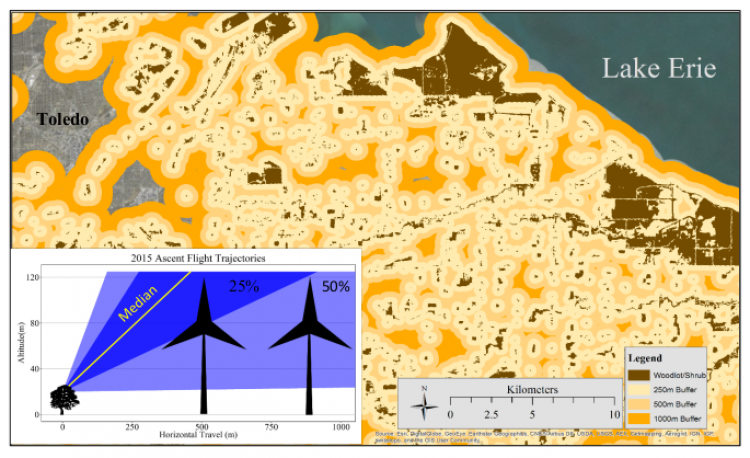