Wetlands and surface waters are critically important for both natural and anthropogenic processes including climate regulation, the maintenance of biodiversity, and the provision of ecosystem services important for human well-being. Until recently, mapping the spatial and temporal variability of the Earth’s surface waters and wetlands would have been an impossible task. However, with advances in cloud and high-performance computing, the ability to discern trends and continuously monitor and map the Earth’s surface has emerged. Using Google Earth Engine (GEE) and a Landsat time series beginning in 1985, this project is supporting land management applications of the Department of the Interior by increasing the ability to monitor and map the dynamics of surface waters and wetlands, monitor in near real-time the inundation of surface waters, and understand how the dynamics and variation in inundated area influence carbon storage and greenhouse gas accounting. 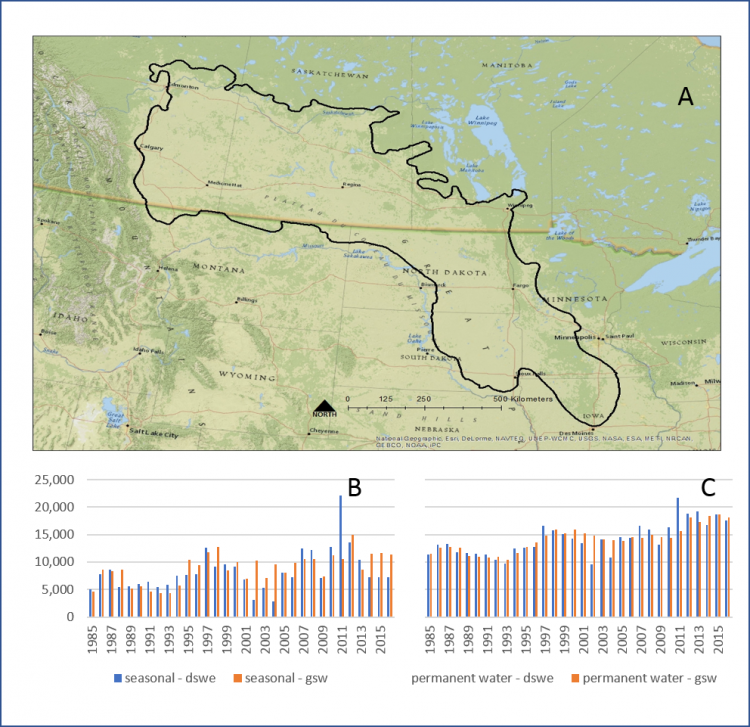 Variability over time of area (sq km) of seasonal inundation (B) and permanent water (C) within the Prairie Potholes Region of the US and Canada (A), using the Landsat time series (1985–2016) and products from the Global Surface Water (GSW) dataset, and the Dynamic Surface Water Extent (DSWE) dataset.