The Red Gulch Dinosaur Tracksite near Shell, Wyoming, showcases an exposed dry wash with hundreds of Jurassic, carnivorous dinosaur tracks preserved in the rock. The tracks, formed approximately 167 million years ago, were discovered by members of the public in 1997. The BLM has created a 40-acre recreation site around this quarter-acre tracksite and is tasked with preserving the tracks and their value for the public. Stereo image documentation of the site, utilizing a variety of ground-based platforms (booms, monopods, tripods) began in 1998. In 2000, a blimp-mounted camera and low-flying manned aircraft were used to collect additional imagery. In June 2019, BLM again acquired stereo images over the tracksite, but this time using a 3DR Solo unmanned aircraft system (UAS). Mapping flights were designed to capture stereo imagery from 15, 30, 60, and 125 feet above ground level (AGL), resulting in orthomosaics of the tracksite with resolutions ranging from 1.5 to 10 millimeters ground sample distance (GSD, the measure of a square pixel edge ground coverage). Paleontological staff intend to use the resulting orthomosaics and digital surface models to better understand the site and measure changes in surface elevation and relative relief of the individual tracks to determine how fast they are eroding. Such data will assist in management decisions for this popular BLM recreation area.

To survey for additional exposed strata potentially containing dinosaur tracks, and to provide baseline imagery for monitoring of the larger Red Gulch Area of Critical Environmental Concern (ACEC), BLM staff surveyed an additional 200 acres to the east of the tracksite using the 3DR Solo UAS at 1 centimeter GSD, and an additional 1,000 acres at 2 centimeters GSD using the newly acquired Firefly Pro 6S. The Firefly is a vertical take-off and landing fixed-wing UAS that takes off like a helicopter, and once airborne, flies forward like an airplane. The Firefly was programmed to fly autonomous mapping missions at 500 feet above ground level. A 42-megapixel camera, mounted on the aircraft belly, acquired stereo images at locations determined by the flight plan. With a flight time of approximately 30 minutes, each Firefly mission covered approximately 150 acres. The ability to acquire 2 centimeters GSD orthoimagery over 1,000 acres in a single day greatly expands the remote sensing capability of BLM Wyoming and, in this, case provides useful monitoring data for the paleontological program. 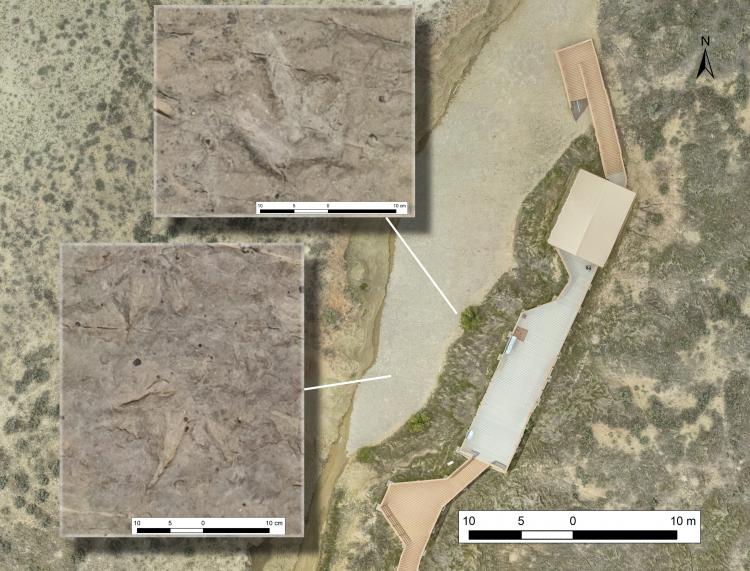